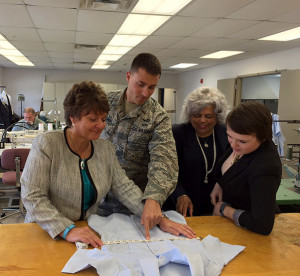 When an airman gets dressed for his or her job, he or she dons apparel and equipment that were developed, produced, deployed, sustained, and modified by a group of fewer than 20 people working at Wright-Patterson Air Force Base, Ohio.

The Air Force Uniform Office, Air Force Life Cycle Management Center, has been at Wright-Patterson AFB since its inception in 1947.

The uniform items and equipment are designed to enhance Airmen’s appearance, performance and combat readiness.

All new designs as well as continuous product improvements are developed with user input and involvement in fit and wear tests. When a technical data package is complete, it is provided to the Defense Logistics Agency or Army and Air Force Exchange Service for procurement. The AFUO has technical responsibility for clothing items until they are retired from the system. Through the Continuous Product Improvement program the AFUO is able to identify, track and resolve issues on sustained uniform products.

The office manages 500 items used on a more regular basis but the total number of items for which it is responsible is in the thousands. The AFUO products are worn by the newest Airmen entering the service through senior leadership. The office’s clothing designers, textile technologists, pattern designers, fabricator, engineer and program manager juggle multiple projects to meet user requirements.

“I find it amazing that such a small building and such a small group of 19 talented people can perform a task that will outfit the entire Air Force,” said 2nd Lt. Adam Samlowski, the program manager. “I find it very inspiring.”

Among the prioritized CPI programs was the service dress uniform, which has been placed on hold while the team addressed user needs on the Airman battle uniform and associated organizational individual equipment.

The current service dress shirts had not been updated since 1986.

“This CPI was an excellent opportunity to improve the shirt fit, appearance and care and utilize technical advances in fabric,” Roan said.

To gather research for the program, a survey issued through the office’s portal page drew 2,600 responses and “a lot of really great feedback on what the users wanted to see be changed and identify problematic areas of the shirt,” she said.

The office compiled the information and undertook a fit evaluation of the current shirt two years ago to see it on users. After reviewing anthropometric data and survey responses, prototypes were developed and test assets were procured. The women’s overblouse and tuck-in shirt will be tested first, then the men’s shirt in mid-June at Wright-Patterson AFB.

Because service dress is seldom worn at Wright-Patterson AFB, a test has been arranged at the Pentagon from mid-July to mid-August, Roan said. The Pentagon offers the greatest opportunity for wearers who wear service dress at least four days per week. All technical data will be given to the DLA at the end of September.

The AFUO is looking forward to seeing the service dress shirts “in action.”

“Building an aircraft takes a number of years, but we’re able to see our initial prototype the first year and the final product is generally on the shelf in about three years,” said Yvonne Wilson, the section chief, clothing and textiles. “It’s pretty exciting. What makes us unique is that we have one design that has to fit all body types which is unlike industry.

“We have one design that we have to make work for everyone,” she added. “The challenge is to make sure we fit the user and can accommodate their needs and job function.”

Another challenge to the new service shirt design was the office’s intent to reduce the number of alterations, Samlowski said. Many people have been choosing to have alterations made to create a neater and sharper appearance.

The new shirt will reflect a combination of regular and athletic sizing systems, Wilson said, and will reduce the need for as many alterations, thereby being more cost-effective.

About 50 percent of online respondents said they have had their shirts altered to the tune of $10 to $30 apiece out of their pocket plus the cost of the garment.

“While it gives you that flexibility to fit more people if you expect they will have the shirt altered, it puts the burden on our user,” Roan said. “We’ve really worked hard to adapt our patterns to the ever-changing physiques of what we expect our Air Force users to be. They are fit people.”

The updated men’s service dress shirt will offer a more tapered fit, much like the old athletic fit, she added, rather than the previous classic fit.

Yet another focus has been on lengthening the service dress shirt to address user concerns. That development needed to be done in advance of improvements to the men’s trousers and women’s slacks and skirts, which could have a waistband redesign to reflect a more modern, professional cut.

One challenge the AFUO faces is the U.S.’s diminishing number of textile suppliers; all its products must be U.S.-sourced as required by the Berry Amendment.

Roan’s past career involved working in industry; she noted how different designing for military service members is.

“It’s still textiles, it’s still apparel but it has new challenges that you don’t have in industry. For the most part, it’s being restricted to U.S. fibers and textiles that limit our choices, so we have to make that work for everybody,” she said. “It’s so fulfilling when you are able to accomplish that. I think our users are super-appreciative when we are able to accomplish that.”

“A lot interaction occurs with the participants,” Wilson said. “We don’t look at comments as complaints, but rather as concerns. If we aren’t designing that garment suitable for its use, then we have failed in our mission.

“Every airman has to have our product,” she said. “We are the only office in the entire Air Force that can say that.”