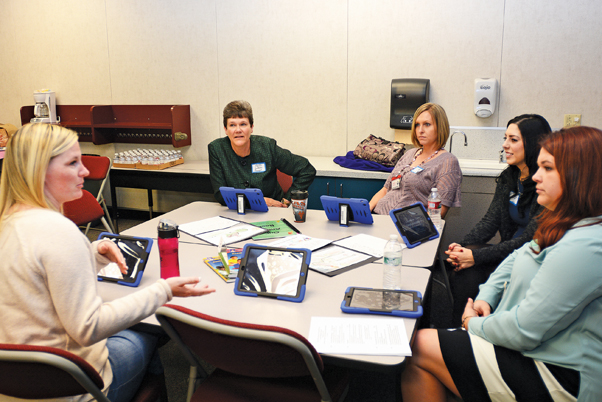 A group of educators and parents met to provide input for the best strategy in sustaining success and making improvements at Lewis Elementary School here, Jan. 26.

The meeting was part of the Silver Valley Unified School District’s strategy-building plan that involves each of its seven schools. Fort Irwin is site to three – Lewis, Tiefort View Intermediate School and Fort Irwin Middle School.

LeBlanc opened the meeting with a report on the school’s academic improvements. She explained Lewis increased its academic performance index from 781 to 897 in 2013. The school also met all growth targets for California’s adequate yearly progress in 2013 and exited the state’s program improvement program that same year. Lewis received the Title I Academic Achievement Award for 2013-14. She credited the school’s progress to her teachers.

“I have an outstanding staff,” LeBlanc said. “I cannot tell you how nice it is to be able to go into any classroom and see learning going on. That great teaching really contributed to the growth that we have had.”

“They support us at our school sites consistently through … staff development, through … technology, through all of the implementation we have been doing,” LeBlanc said. “The district is very supportive of us.”

Youskievicz said the district’s API score of 815 has placed it as the highest scoring in the high desert. The Lewis score of 897 in the California Standards Test places the school in the highest ranking tier, 10, in the state.

“We’ve had great success,” Youskievicz said. “The challenging part is ‘Where do we move from here? Once you’re successful, what’s the next step we have to take?’ That’s why you’re here today. Let’s talk about that success and build on it.”

The district’s meetings at school sites during its strategy planning began last year, said Youskievicz. However, SVUSD has been strategizing for almost a decade.

“Silver Valley decided about seven years ago to go into a strategic planning process and part of that process was built on trying to focus more on what is really important,” Townsend said. “By having a focus, [SVUSD] … would be able to concentrate efforts on the key things that were really going to make a difference in this district.”

Najera explained that the 2007 district strategy was developed around the four focus areas of student achievement, technology, parent and student support, and district stability.

“We’ve always had priorities in our district strategic plan, so to us the LCAP just fell into what we were doing already,” Najera said. “We’re excited that we’re ahead of the game that way.”

The LCAP directs accountability to the local level.

“We’re going to be held accountable by our own school board, our community – our own stakeholders,” Najera said.

During breakout sessions at the meeting, four Lewis teachers presented topics to the attendees who then discussed concerns or offered recommendations. Topics covered were common core standards, community involvement, technology, and Positive Behavioral Interventions and Support.

Andrea Janoe, a military spouse with a child in Lewis and substitute teacher, appreciated the discussion on common core. She mentioned her experience as a teacher in several school districts around the country and described SVUSD as very attentive to the needs of the community.

“I’ve sat at the [SVUSD] strategic planning meeting as well and it is, by far, the most collaborative district that I’ve ever been a part of,” Jano said. “They really collaborate with each other and listen to all parties involved in the school system – and I haven’t really seen that in very many districts that I’ve worked for or been a part of.”

Janoe said the district wants to hear constructive ideas and wants to be successful, beginning at the local level.

The recommendations made at the four table presentations would be further discussed by school staff in a second meeting, said LeBlanc. The district will eventually incorporate those deliberations into its LCAP, which will be presented in a public hearing and to the local school board later this year, said Youskievicz.

Inspiring a bright future from the past