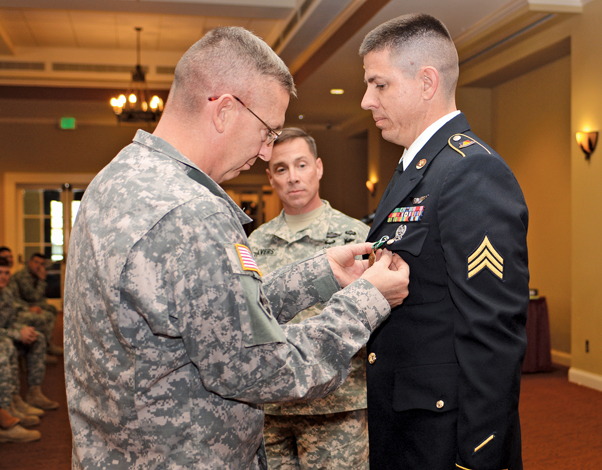 The event awarded Soldiers and Department of the Army civilians for various achievements. The non-commissioned officer of the year, for fiscal year 2014, received an Army Commendation Medal. Four Soldiers and NCOs received Army Achievement Medals for winning boards in two quarters of fiscal year 2015. Civilians received length of service awards and employee of the year awards.

The NTC and Fort Irwin Commander Maj. Gen. Ted Martin and Command Sgt. Maj. Stephen Travers served as the official party and presented medals and certificates. Soldiers and NCOs also received keepsakes and gifts from the Association of the United States Army, the Exchange, the Sergeant Audie Murphy Club, and Family, Morale, Welfare and Recreation.

Martin expressed that it is important to understand the significance of the recognized individuals to the NTC team and its mission of training rotational units.

“You know it’s hard to do, because we do it each and every month,” Martin said about the training schedule. “And it couldn’t be done without the entire team, from the Department of the Army civilians, to the Soldiers, to the families, to the contractors, to everybody who comes to Fort Irwin, California – to make it a successful operation for the brigade combat teams that come here to hone their combat skills.”

The general asked the younger generation to take heed of the service by those being awarded.

“Try to become what they are – great shining examples of both Department of the Army civilians, and Soldiers and non-commissioned officers – that’s what it takes,” Martin said.

Bailey, a helicopter (AH-64 Apache and OH-58 Kiowa) repairman with Eagle Team, OPS GRP, competed in five boards to reach his milestone. He was excited and surprised to learn he won, and explained that the most challenging aspect of the process was getting over his nerves and focusing on the task.

He recommends to junior Soldiers and NCOs that they participate in quarterly board competitions, because it helps with career progression – regardless of the outcome.

“It prepares you for promotion boards and we all want to do well at those,” Bailey said. “It helps you learn doctrines and regulations that we should already know. And if you progress far enough into the competition you will brush up not only in knowledge, but skills also. It can do nothing but help you – if you go into it with the right attitude.”

Carols and Candlelight for Christmas