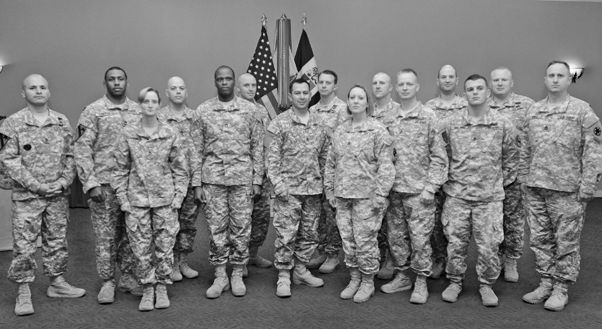 The training is considered a milestone in career progression for senior NCOs. It instructs on specific staff duties, makes NCOs familiar with the duties of other staff sections, and prepares NCOs to serve in battalion and higher level staff positions – according to the USASMA Web site.

“Your peers, subordinates and superiors will look to you for sound judgment, increased performance and exemplary leadership,” Defresse stated. “This investment in your professional and personal education is true testimony to the Army’s confidence in your future potential.”

“The battle staff course is a challenging course and … should be rooted in all NCO development,” Gandy said.

Gandy recounted two experiences that demonstrate the significance of battle staff instruction and properly trained NCOs. In the first, he spoke about serving in a battalion on rotation here and witnessing the difficulties NCOs in staff positions underwent; the NCOs, although hard-working and operating a tactical operations center, did not understand how to integrate sections and create fusion. He took this lesson to his next assignment as a battalion command sergeant major with a unit preparing for a deployment to Afghanistan in 2011.

Gandy and his battalion commander searched for the right NCOs and got them the correct training, he said. The preparation paid off, with one of the senior NCOs proving invaluable as a fires support NCO. That senior NCO’s trust, confidence and training led to the elimination of rocket cells, which had been firing on the unit’s TOC and forward operating base.

“Soldiers that are trained are relevant,” Gandy told the graduates. “This course has made every one of you a technical expert. I challenge every one of you to go back to your unit and be relevant. Never let the Army, your unit or your Soldiers forget how important this school is.”

Bascom, an operations NCO with S3 in the 2nd Squadron, 11th Armored Cavalry Regimnet, said the most challenging topics were the military decision making process and intelligence preparation on the battlefield. He already worked in a position that requires interacting with different sections, but the training has provided additional understanding.

“Now I know what the staff does,” Bascom said. “It’s a great course to take. It’s a great career progression.”

Assistant instructor, Sgt. 1st Class Christopher Flagg, described the course as not easy and fast-paced. He added that it is highly encouraged for senior NCOs in staff positions to take the training to become “effective on the battlefield” and not “a hindrance to your leaders that depend on you.”

“It adds to that Soldier’s ability and knowledge as a senior NCO,” Flagg said.