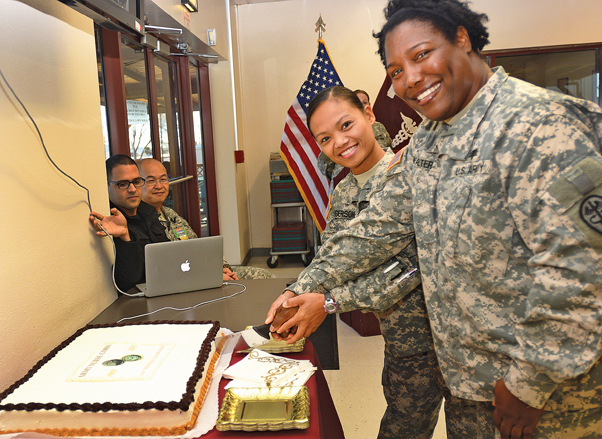 Military and civilian medical personnel gathered for a celebration of the 114th year of the Army Nurse Corps at Weed Army Community Hospital here, Feb. 2.

Soldiers, Department of the Army civilians and leadership with United States Army Medical Department Activity commemorated the anniversary, which has a theme this year of “The Army Nursing Team: Demonstrating the courage to care, connect and change for 114 years.”

First Lt. Michele Shimko, a registered nurse with Post Anesthesia Care Unit of MEDDAC here, narrated the ceremony and recounted the beginning of nursing in the United States military.

“The Army Nurse Corps has a rich and extensive history dating back many years before the corps was officially established in 1901,” Shimko said. “General George Washington asked Congress in 1775 for nurses to tend to the sick and obey the matron’s order, and a matron to supervise the nurses, bedding and other needs. Each nurse was responsible for the complete care of 10 patients, while originally earning $2 a month and only one ration per day.”

Deputy commander of Nursing Services with MEDDAC, Col. Cathy Walter, addressed the audience and said that nurses leave a lasting impression on people who have been under their care. She explained that Wounded Warriors often give credit to nurses when recovering from injuries.

“We touch lives every single day,” said Walter, who has served for more than 24 years.

Walter spoke about nursing attributes that makes the corps successful, such as collaboration, reliability, organization and compassion. One objective of nursing is getting patients to an optimal state of health, and nurses continue to improve care by using technology and evidence-based practices. The goal of nursing here is to care for family members, Soldiers here on rotation, Soldiers of this installation, and civilians.