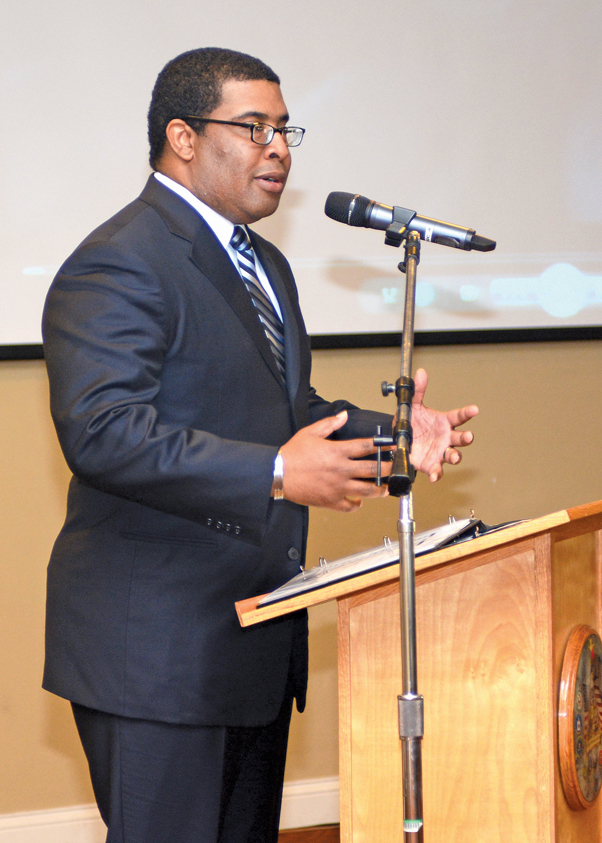 This year’s theme was “A Century of Black Life, History and Culture.” The commander of the Regimental Support Squadron, 11th Armored Cavalry Regiment – Lt. Col. James Stephens – said the event commemorated the “culture and accomplishments of our African American citizens and Soldiers, who have fought behind our stars and stripes in every war and who have significantly contributed to the rich cultural tapestry of America.”

“We are grateful for the past, present and future contributions of African American Soldiers and citizens to the success of our Army and the prosperity of our nation,” Stephens stated.

The ceremony featured honorary speaker, Maj. Kiryenski Jones, who is the officer in charge of Sustainment Automation Support Management with 11th ACR.

Stephens explained that Jones is helping shape the computing environment with the Global Combat Sustainment System Army, which is a $4.8 billion change to the Army’s logistics information system.

“He’s not just doing this for the 11th ACR and the National Training Center, but his contributions are making an impact across the whole Army,” Stephens said.

Jones spoke about the life lessons he learned from his grandfather John Clark. Jones remarked that, as a third grader, he was too young to understand or value the history behind the man who wanted the best for his family.

“I was unappreciative that he and my grandmother had not finished fourth grade, but had save enough to send my mother to a private school,” Jones said. “I was also unaware, that in his eyes, maybe having literate grand children was pretty much a job well done for him.”

Jones was also influenced by the life experiences of Johnson Chesnut Whittaker, who was one of the first African American cadets at the United States Military Academy. Whittaker was born into slavery in 1858 at the Chesnut plantation in South Carolina, said Jones. He was appointed to West Point in 1876, but in 1881 he was expelled after a court martial wrongly convicted him of fabricating being assaulted, though he had been attacked by three cadets.

Jones emphasized that Whittaker’s accomplishments really began after his setback at West Point.

“What Whittaker does after that is what really brings about that … urge to make a positive, quality contribution as a citizen,” Jones said.

After his expulsion, Whittaker became a lawyer, a high school principal and a college professor in South Carolina, said Jones. Whittaker’s two sons served as commissioned officers in World War I, with one later becoming the president of South Carolina State University; one grandson served as a Tuskegee Airman, and; a great granddaughter was a founder of the “Detroit Tribune.”

Whittaker’s contributions and influence were not brought to light until the mid 1990’s, Jones stated. A movie publicized Whittaker’s story and, in 1995, President Bill Clinton presented to his heirs a posthumous officer commission. Jones remembers the occasion and was motivated to act.

“I’m coming out of high school and I’m fired up,” Jones said. “I’m feeling pretty good about what I want to do with my life. That gets me over into Milledgeville (Georgia Military College). And that gets me to reflecting on the human being and the citizen I’m going to be for the rest of my life.”

Jones reflected on his grandfather and shared his attitude about life.

“If you’re going to be an American you can’t be bitter,” Jones emphasized. “If you’re going to be an American, understand you’re going to be judge by the quality of your contributions to the nation. Now at 37 … I’m aware of the power of progress, sacrifice, vision and the vision of those before me.  I’m aware that even though John Clark was illiterate, he was probably a lot wiser than I’ll ever be. I’m appreciative that Mr. Whittaker faced adversity and continued to contribute to his state and this nation. And lastly, I’m ultimately proud to understand that America, my country, has the ability to invigorate a bright future from its past.”