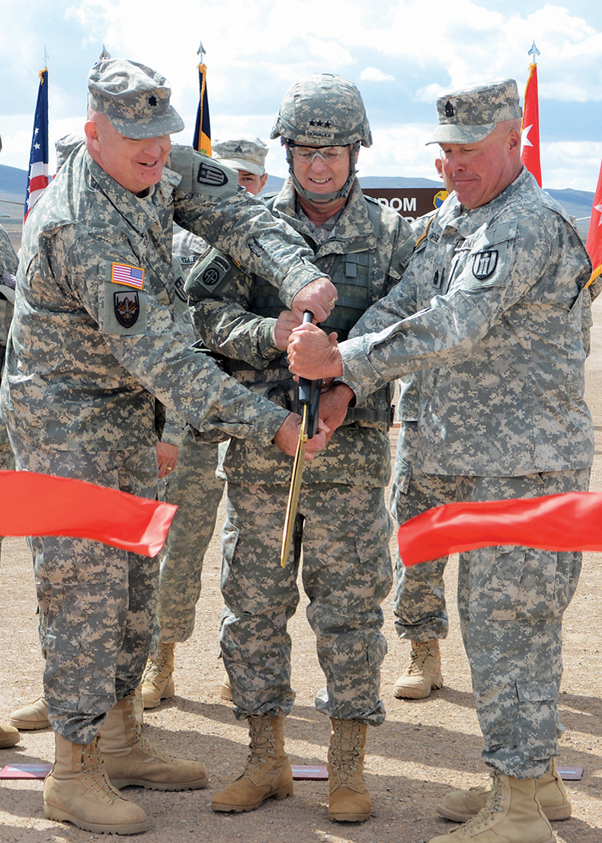 A ribbon cutting ceremony signaled the conclusion of construction for a landing strip project in the training area of this Army combat training center, March 3.

The event inaugurated two 7,700-foot long landing strips and an apron that can accommodate up to 20 C-17 or C-130 airplanes, according to Sgt. Maj. Rick Virgil, non-commissioned officer in charge of the project and with the 416th Theater Engineer Command of Darien, Ill.

The task involved moving more than 750,000 cubic yards of dirt in a western area of “the box,” adjacent to forward operating base Seattle. The three-month assignment, which began Dec. 3, was performed by Soldiers in United States Army Reserve units from various states. Work was performed in two shifts per day, with 18 to 24-hour days at times.

Officer in charge of the project, Capt. Andrew Marchese (389th Engineer Battalion out of Dubuque, Iowa), explained there were 13 units involved, with three engineer companies as primaries. The primary companies were: 387th Engineer Company from Phoenix, Ariz., 411th En. Co. from Iowa City, Iowa, and 801st En. Co. of Vallejo, Calif. The other 10 units augmented the companies throughout the construction.

The units performed the work, at the same time completing annual training required of Reserve Soldiers, said Marchese. Normally, an AT duration is 14 days, but the companies spent, respectively, 21 days, 29 days and 25 days during their rotations here.

“To all the Soldiers involved, I would say ‘Thank You’,” Marchese said. “It was an invaluable experience for all of them – some of the best training they’ll get overall. It’s probably one of the biggest projects most of these Soldiers will work on in their military career.”

At the ribbon cutting, U.S. Army Forces Command Deputy Commander Lt. Gen. Patrick Donahue II said the landing strips are a win-win for the military. He thanked the Soldiers for their work, which he described as non-stop.

“Be proud of what you’ve done,” Donahue said.

Freedom Flight Landing Strip is actually two 7,700-foot long landing strips and an apron that can accommodate up to 20 C-17 or C-130 airplanes. The project involved moving more than 750,000 cubic yards of dirt in a western area of “the box,” adjacent to forward operating base Seattle.