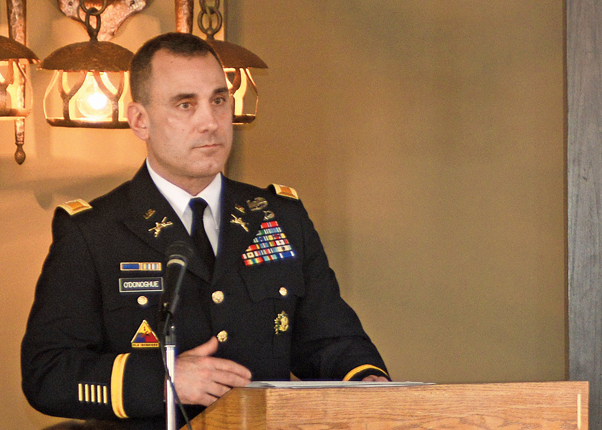 Department of the Army officials and leadership of this installation addressed Barstow civic and business leaders about Army-wide reductions during a meeting in Barstow, March 17.

The “Listening Session” is one of many the Pentagon is holding in communities near military installations to give details about Army-wide reductions and to receive input from the community.

John McLaurin, deputy director of Force Management with DA headquarters G3/5/7, described the meeting as an opportunity for community members to voice concerns and thoughts. He credited civilian communities for going “the extra mile to take care of our families especially, while troops were deployed.”

“We care about you, your community, and what you’ve done for us, so we want to hear from you and take that back with us,” McLaurin told the audience of about 80.

According to a briefing by Col. Tom O’Donoghue, United States Army Force Integration officer with DA headquarters G3/5/7, the reduction in Soldiers is driven by the 2011 Budget Control Act and 2012 Defense Guidance. The Army is slated to reduce active component Soldiers to 490,000 and reduce brigade combat teams from 45 to 32. However, Army forces could be reduced to 420,000 due to a budget cut of $95 billion during the next 10 years.

National Training Center Chief of Staff Col. Richard Wilson stated that the NTC is here to stay and explained, though the number of BCTs will go down, the remaining will increase in size. The NTC will keep on training brigades and brigades will still move through the region.

Wilson acknowledged the community members and thanked them for everything they do for the NTC and Fort Irwin.

Barstow’s mayor, Julie Hackbarth-McIntyre, mentioned the experience of two years ago, when not all scheduled training rotations took place. She stressed to the DA officials that the Army installation is vital to the economy of her city and she is appreciative of that.