The 58 projects scored came from approximately 200, which were created by students from the 11 classes of fourth and fifth grade, said Brenda Clark – third grade teacher and head of the school’s science fair committee. The finalists will be announced in an upcoming quarterly awards assembly at the school.

Students began working on the science assignments in January, according to Clark. Every student in fourth and fifth grade completed a project as part of their curriculum. The students learned about the scientific method, while experimenting with a topic of their choosing (with teacher approval).

“It’s a time for them to really explore science on their own,” Clark said. “They’re excited to present what they did – to actually show something they did on their own or at least with some parent help.”

Clark explained students came up with a question, hypothesis and a procedure to test for results. Results were recorded and a conclusion determined. Students also had to conduct research and write a paper. Projects were comprised of: a board and materials from the experiments; photographs; graphs; tables, and; text describing the experiment.

Zachary Cook, 10, a fourth grade student in Mikaela Kopper’s class, created a project titled, “Do you have to brush your teeth?” His question was, “Which foods make the most bacteria in your mouth?” and his materials included petri dishes, five foods, and q-tips. After eating chips, cookies or Twinkies, Zachary’s mother would swab his saliva and dab it onto a petri dish lined with agar. He created samples before and after brushing his teeth. After several days, bacteria growth appeared on the dishes.

Fifth grade student, Madison Burke – 11 and in Briarly Mayeda’s class – constructed a project called, “Too Salty” to determine what affect adding salt to water would have on the buoyancy of objects in the water. Steps in her experiment included a control of five cups of tap water, a second container had the same amount of water and one cup of salt added, and her third step had two cups of salt added to the water. To each container, a fishing bobber was added, and the level at which it floated was recorded.

Madison determined that “salt added to water increases the density of the body of water making the object more buoyant.” In her research, she discovered that the density of salt water depends on the amount of dissolved salt in it. A cubic foot of fresh water weighs 62.4 pounds, but a cubic foot of salt water weighs 64.1 pound. The molecules of the salt combined with the molecules of fresh water, stiffen it up because molecules of the water fasten themselves to the salt molecules.

The fifth grader said she likes science and learning about the world. She appreciated her parents for their support in her project.

Many of the students put a lot of effort into their projects and presentations, said Mr. Thompson. He was impressed by the complexity of the projects and noted that a lot of information is now available to students.

“Their enthusiasm and enjoyment of their subject was evident,” Mr. Thompson said.

Clark thanked the support from school staff and parents, “because without them it wouldn’t have happened.” She also acknowledged the judges, highlighting the Thompsons.

“Janna Thompson has been a part of the Fort Irwin community for quite a while and has touched many lives,” Clark said. “What Janna does is serve, and encourages others, constantly. Janna and Harry Thompson are the ‘salt of the earth kind of people’ who you don’t forget, and who leave people and places in better shape than when they first arrived.” 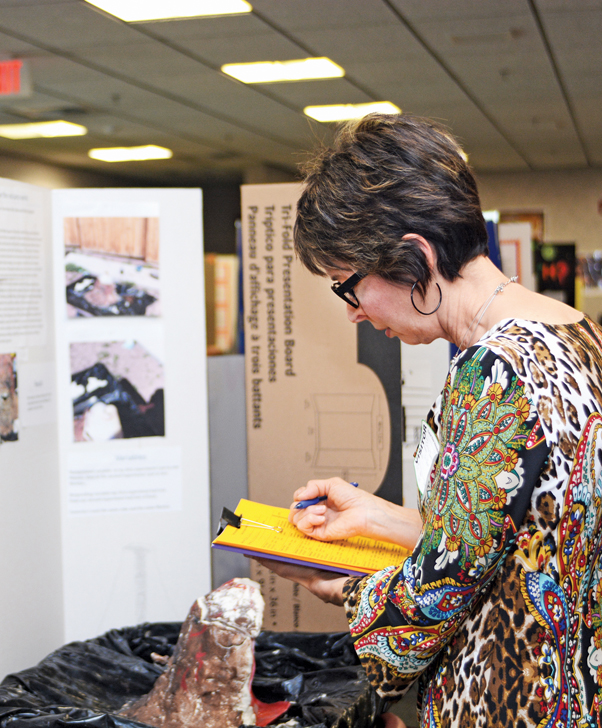 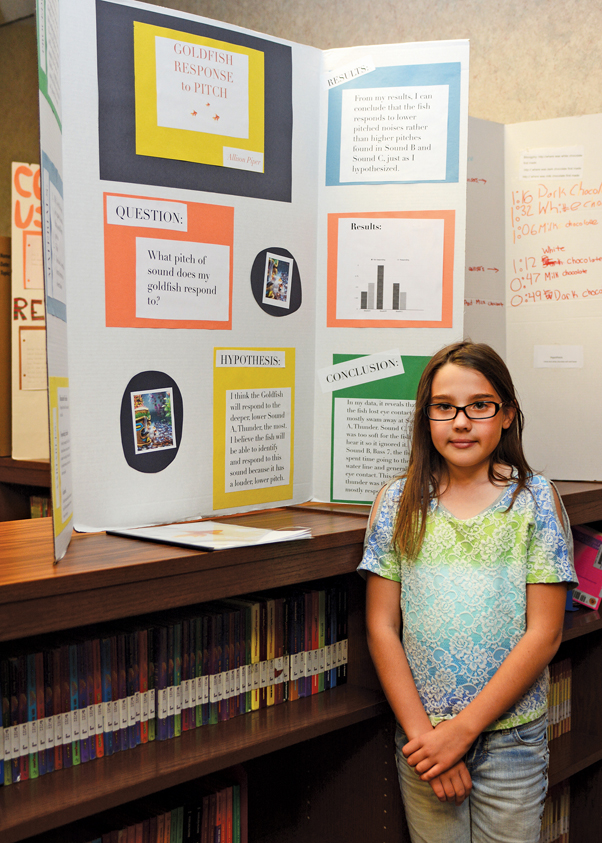 Allison Piper, 11, a fifth grade student in Briarly Mayeda’s class, stands alongside her science project, “Goldfish Response to Pitch” at Tiefort View Intermediate School here, March 9. She hypothesized that her fantail goldfish “Twitchy” would react more to deeper, lower sounds and she was correct when noting that the fish reacted actively to the sound of thunder. 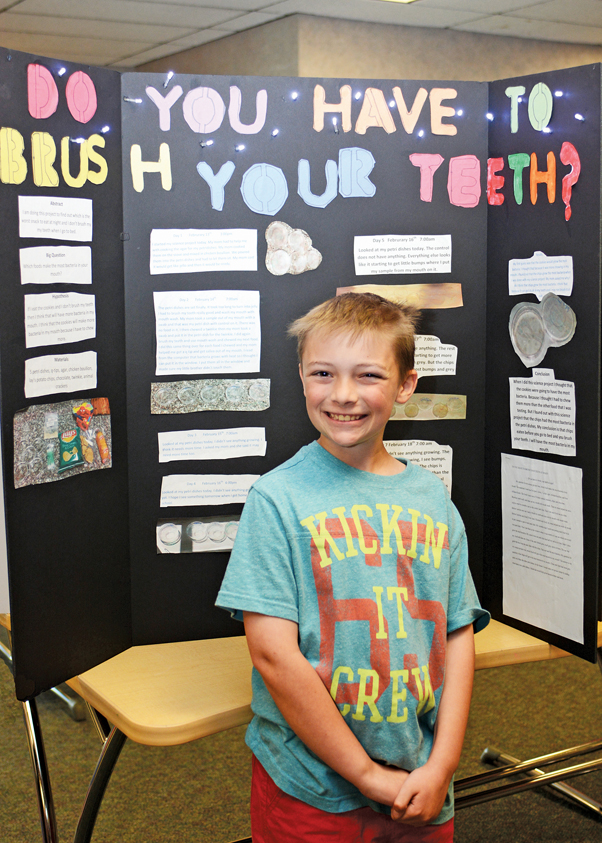 Zachary Cook, 10 and a fourth grader with Mikaela Kopper’s class, stands in front of his science experiment at Tiefort View Intermediate School here, March 9. His project, “Do You Have to Brush Your Teeth?” His materials included petri dishes, five foods, and q-tips. Through his experiment, he concluded that chips produced the most bacteria in the petri dishes.