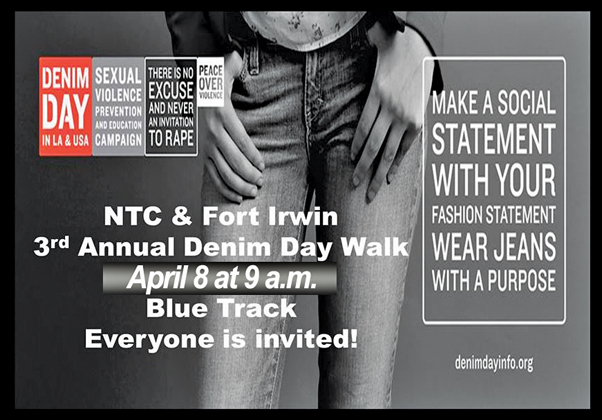 On April 8 at 9 a.m., residents of Fort Irwin will walk through the community in support of the Third Annual Fort Irwin Denim Day.

Many have asked about the meaning behind Denim Day. The history of Denim Day begins with a story and unfortunately this was a true story.

In Rome in 1997, an 18-year old Italian girl was receiving her first driving lesson from a married, 45-year old driving instructor. During the lesson, the instructor took the young lady to an isolated road, pulled her out of the car, wrestled her out of one leg of her jeans and forcefully raped her. He threatened her with death if she told anyone of the rape. Despite the threat, the young lady reported the incident to the authorities.

The driving instructor was eventually convicted of rape and sentenced. He appealed the sentence and the case was heard and overturned by the Italian supreme court in 1998. Within a matter of days the case against the driving instructor was overturned, dismissed, and he was released. In a statement by the chief judge, he argued, “because the victim wore very, very tight jeans, she had to help him remove them, and by removing the jeans it was no longer rape, but consensual sex.” Additionally, the Italian supreme court stated in its decision, “it is a fact of common experience that it is nearly impossible to slip off tight jeans even partly without the active collaboration of the person who is wearing them.”

The women in the Italian parliament were enraged by the verdict and they launched into immediate action and protested by wearing jeans to work and holding placards that read “Jeans: An Alibi for Rape.” From this display of outrage, wearing jeans on Denim Day has become a symbol of protest against erroneous and destructive attitudes about sexual assault.

On April 8, we appeal to Soldiers, family members and civilians of Fort Irwin to make a social statement with their fashion by wearing jeans as a visible means of protest against the misconceptions that surround sexual assault.

Additional facts that may motivate you to participate in Denim Day:

– Half of female sexual assault victims were raped before age 18 (White House report, “Rape and Sexual Assault: A Renewed Call to Action”)

– More than one fourth of male sexual assault survivors were raped before they were 10 (White House report, “Rape and Sexual Assault: A Renewed Call to Action”)

– Eighty-two percent of rapes committed by an intimate are not reported to the police (Rape, Abuse & Incest National Network/Department of Justice)

– Only about one out of four reported rapes leads to an arrest. Similarly, only about a quarter of arrests lead to a felony conviction and incarceration (RAINN/DOJ)

– 17.7 million American women have been victims of attempted or completed rape (NIJ and CDC)

– One in six men has experienced abusive sexual experiences before the age of 18 (1in6.org)