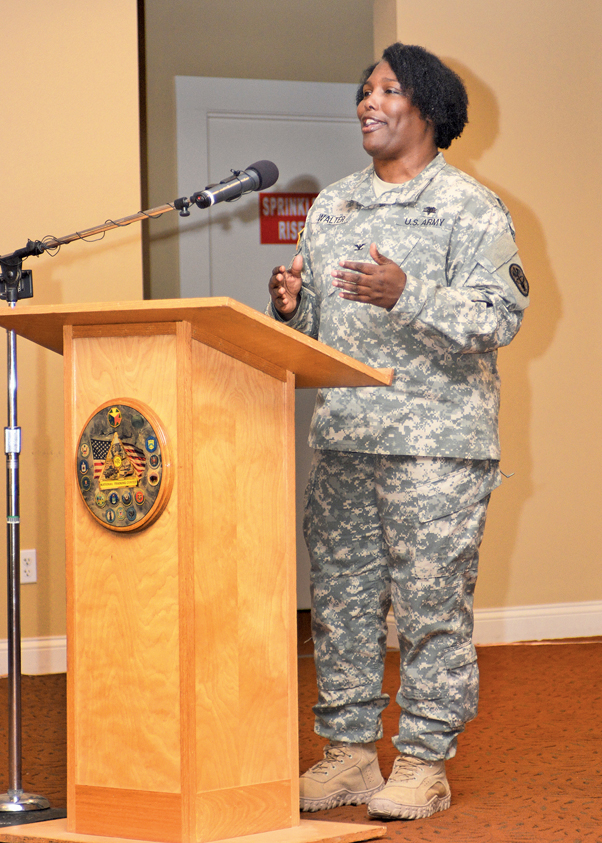 The theme for the annual observance was “Weaving the Stories of Women’s Lives.” The theme presents the opportunity to weave women’s stories – individually and collectively – into the essential fabric of our nation’s history, according to the National Women’s History Project.

“My story is small, but it had an impact on who I am today,” Walter said.

Walter spoke about her dream to become a nurse when she was in second grade. She explained that her grandmother and two aunts were licensed vocational nurses. Her desire arose after listening to one of her aunts talked about assisting in the delivery of a baby.

Walter’s goals became to study and pursue that dream. She explained that her mother could not afford her higher education expenses, so she worked several jobs to put herself through college. Some of those jobs included working at McDonald’s, at Charity Hospital in New Orleans and taking care of patients at night.

“So, when you say you have a dream, you also have to put the effort forward to make your dreams come true,” Walter told the audience.

After graduating from nursing school, Walter worked in the civilian sector. It wasn’t until 1991 when she decided to serve in the Army and attended officer basic course, she said. Her initial duties included taking care of neo-natal intensive care unit patients – premature babies. Her passion was in pediatrics, taking care of babies and working with newborn nurseries. That was her dream job.

You just have to start with a dream, said Walter.

“If you have a dream and you teach that to your kids, your family members early in life, that triggers [them] to say, ‘I want to be somebody, I want to do something with my life,’” Walter said. “You don’t ever have to stay where you are, in any situation that you’re in, to move forward and accomplish whatever you want.”

Walter accentuated the role of mentors, including a high school counselor who guided her in preparing for college.

She concluded by reminding the attendees to thank their mothers and to treat people with dignity and respect – a philosophy her grandmother applied to her patients and articulated to Walter.

“If we do that every single day, guess what, the world would be a better place,” Walter said.