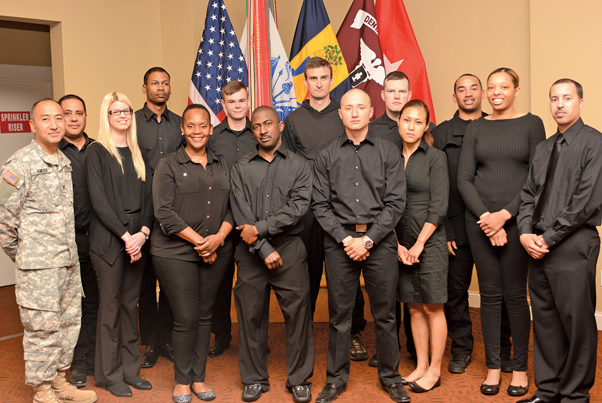 The Fort Irwin community honored the annual Days of Remembrance observance with a ceremony here, April 8.

The national commemoration period this year is April 12-19 and the 2015 theme is “Learning from the Holocaust: Choosing to Act.” Congress established Days of Remembrance as the nation’s annual commemoration of the Holocaust and created the United States Holocaust Memorial Museum as a permanent living memorial to the victims, according to the museum’s Web site.

The Web site explains that the Holocaust was the systematic, bureaucratic, state-sponsored persecution and murder of six million Jews by the Nazi regime and its collaborators. The Nazis, who came to power in Germany in January 1933, believed that Germans were “racially superior” and that the Jews, deemed “inferior,” were an alien threat to the so-called German racial community. The Holocaust took place in the broader context of World War II and by the end of the war in spring 1945, as the Germans and their Axis partners were pushed back on both fronts, Allied troops uncovered the full extent of crimes committed during the Holocaust.

At the ceremony, a lighting of seven candles remembered the victims of the Holocaust. A video provided insight about the Holocaust and Dental Clinic Command Soldiers and employees read narratives of people who chose to act, saving the lives of Jewish people during the war. The readings described the actions of Bishop Chryostomos of Greece, Marion Pritchard of the Netherlands, Tatyana Kontsevich of Ukraine, and Alfred Rossner of Germany, among others.

Commander of Dental Clinic Command, Col. Todd Kimura, spoke at the ceremony and said the “individuals we have learned about today, 75 years later, demonstrated the ethical and timeless value of dignity and respect to the highest standard.”

“These individuals chose to act and intervene on behalf of their fellow humans,” Kimura said. “Do you think it was easy to make the decision to act? This may have been easy for some and may have been much more difficult for others. What makes it so difficult to make the right decision? I know this is one of the reasons why our government and our Army invest so much money, time and effort towards the EO and EEO program.

“The EO and EEO program is not just for entertainment or to taste different types of foods, but to develop our awareness so we can make the right choices, the right ethical choices and act in the right way whenever the situation may arise.

“Who knows, I made not even be here if someone hadn’t chosen to act on my behalf. Choosing to act for the right cause is the warrior ethos. Being a good battle buddy, a Good Samaritan – regardless of our cultural diversity – is relevant to every generation. One person can make a difference by choosing to act.”

5 common mistakes when dealing with FLIPLS