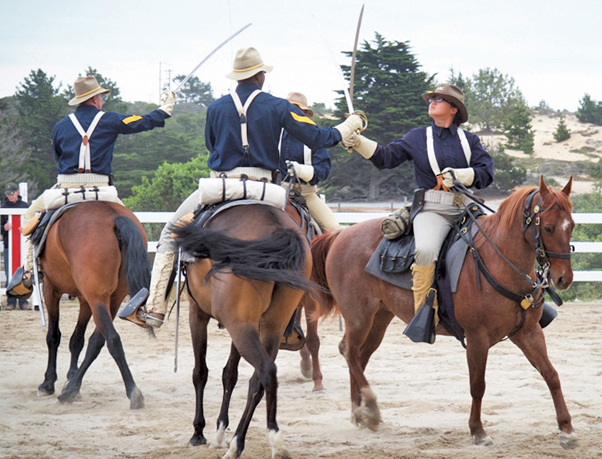 Friends of the Fort Ord Warhorse welcomed the 11th Armored Cavalry Regiment Horse Detachment to their former home station after 75 years of being away from the Monterey Bay area in California to celebrate the history of U.S. Army Cavalry, May 9.

The Blackhorse Regiment and the City of Marina share a unique cavalry history. Years before being decommissioned and turned into the Marina Equestrian Center, Fort Ord was once part of the Presidio of Monterey. Horse cavalry units trained there until 1942 and the Blackhorse Regiment was stationed at the Presidio of Monterey from 1919 to 1940 as the 11th Cavalry Regiment. Director of Friends of the Fort Ord Warhorse, Margaret Davis, shares this history in explanation for inviting the Horse Detachment to participate in Fort Ord Warhorse Day as a major highlight of this year’s celebration.

“Participating in this event was definitely important for the Detachment [since] we try to represent the traditions of the 11th Cavalry Regiment,” explains Sgt. 1st Class Roman Hacker, Horse Detachment First Sergeant. “Just being able to attend this event where the Regiment had been stationed and stabled for 20 years was amazing … but the most enjoyable part was talking to the people that had a lot of knowledge of us and Fort Ord.”

While the event allows community members to commemorate the City of Marina’s historical ties to the U.S. Cavalry, Warhorse Day also enriches the experience of being part of the horse detachment for current horse handlers. Hacker explains that, “it’s good for the Soldiers to see one of the places that we came from at one point and recognize what they are representing and the traditions they are trying to keep alive by doing what they do.”

The Horse Detachment demonstrated an array of traditional cavalry horsemanship and maneuvers to include the use of sabers and revolvers while mounted and at a gallop. Preparing for such an event requires plenty of practice, according to Spc. Travis Gunter, a level two horse handler.

“We practice numerous times, different speeds all the way through, sometimes just portions that we struggle with individually to make sure we have every aspect of the show down pact,” Gunter said.

During their trip to Monterey and Marina, the Horse Detachment also found time to ride their horses on the Salinas River State Beach.

“We had this photo of the 11th ACR doing a charge, so we went down to the beach to recreate the same photo as kind of a time lapse,” Gunter said.

The photograph Gunter mentions was taken by A.C. Heidrick circa 1935 of the 11th Cavalry riding on Del Monte Beach.

“We were a little nervous at first,” Gunter explained. “None of our horses have ever seen the beach – because they are always in the desert – so taking them down to a vast ocean when a couple of them are scared of a puddle is a scary thing at first, but it’s also really exciting to get the horses used to a whole new environment.”

When asked if they plan to return to next year’s event, Hacker heartily responded, “We definitely want to go back next year given the appreciation and just how everybody was so happy to have us attend.”