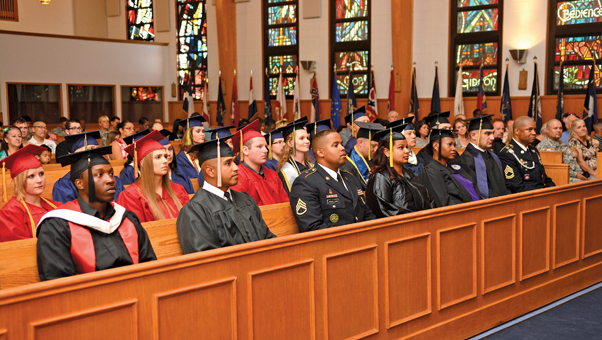 Approximately 25 of the graduates attended the ceremony, which included an audience of family, friends, servicemembers, and leadership of post units.

“Congratulations for earning something that no one can ever take away from you,” Jacobi said. “And congratulations for entering a new phase in your life, be that continued service in the military or following your dreams in contributing to society in another way. The road you have taken requires dedication and perseverance. Congratulations on your persistence and achieving the goals you have set for yourself. We are all very proud of you.”

Carol Queen graduated with an associates of arts in social science from the Barstow College and, while addressing the audience, said it was challenging being a military spouse and going to school, but well “worth it in the end.”

“Military families face many challenges, and going to school usually is difficult because you’re constantly moving around, and it can be hard to stick to a career plan,” Queen explained. “Barstow Community College has opened my eyes to how successful I can be, and with motivation and determination, anything is possible.”

Staff Sgt. Lynnis Nickelson – a tank crewmember with Headquarters and Headquarters Troop, 1st Squadron, 11th ACR and a member of the S-3 battle staff – received his associates of science degree in criminal justice from Kaplan University. Just one month after being stationed here in April 2012, he began his studies. His lowest grade was an A minus, and he didn’t want to get anything worse, so he bought an Internet hotspot and did schoolwork in the field when possible.

His wife, Nicola, acknowledged that he made sacrifices to succeed.

“I am so excited for him,” Nicola said. “I’m just happy that he achieved his dream … because it was a lot of hard work.”

The non-commissioned officer stated he will start this fall working on his bachelor’s, which could lead to a career in homeland security.

“When it comes to your education, you have to make a decision to invest in your future,” Nickelson said. “So … you’re going to have to make some sacrifices, but in the end it’s going to work out for the better.”