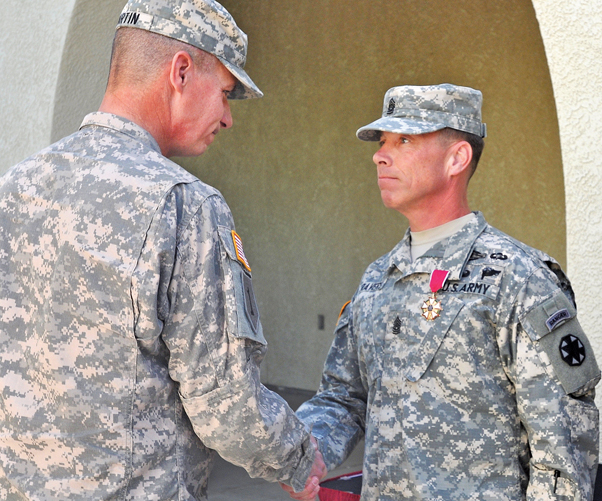 Travers’ next assignment takes him to Fort Eustis, Va., as the senior enlisted advisor at the Army Capabilities Integration Center (ARCIC).

In addressing the more than 200 Soldiers, civilian employees and military family members at a ceremony held at Sandy Basin Community Center, Martin praised Travers, saying, “Steve, you’ve helped guide NTC through a ‘goliath’ transition, a transition from counter-insurgency training to decisive action, [which] we lead the Army with that today.”

“Soldier Readiness and Resiliency – you established the Desert Strong program, created an incredible handbook that stands for resiliency for all installation Soldiers and families,” Martin said. “And for that, we are truly grateful.”

Martin noted how Travers had impacted the NTC: “Soldier morale is high at NTC. Our Soldiers enjoy coming to work each day.”

Martin also thanked Travers’ wife Kathi for her volunteer work at the museum here, for helping raise thousands of dollars for local charities and scholarships, and for being “a superb mentor” for spouses and Fort Irwin’s Family Readiness Groups.

Salinas’ awards include the Legion of Merit, four Bronze Star Medals, two Purple Hearts, six Meritorious Service Medals, six Army Commendation Medals, and seven Army Achievement Medals. He is a member of the Order of Saint Maurice and the Sergeant Audie Murphy Club. He has a bachelor of science in business administration from Tuoro International University and is pursuing a master’s degree in business administration.