From a distance, the scene on a street here certainly appeared catastrophic.

Soldiers with apparent injuries and smoke emanating from a large vehicle on the side of the road gave the impression of an industrial accident, or something deliberate and malicious. Fortunately, it was neither and, intentionally, the road to the scene had been blocked from the public to allow a scenario to unfold during a full-scale exercise conducted here, May 21.

The scenario involved a suspect detonating explosives on a  fuel truck near the rotational unit bivouac area on Outer Loop Road, with the explosion creating “casualties.” Those casualties were role-played by Soldiers, who were fitted with mock injuries, moulage and given casualty cards describing the injury and severity.

Responding to the situations were law enforcement, fire, medical, a guard force composed of Soldiers, ground and air medical evacuation, and other personnel.

Charles O’Neal – director of Directorate of Plans, Training, Mobilization and Security with Fort Irwin United States Army Garrison – said the exercise was designed to challenge the emergency response of the installation and gain insights about its capabilities. The annual exercise was observed and evaluated by personnel from Installation Management Command of Fort Sam Houston, Texas.

“The purpose was to practice our  garrison capabilities that IMCOM requires us to be able to execute during a natural or man-made disaster,” O’Neal said.

In addition to first responders at the scenes, the installation emergency operations center was enabled and staffed by representatives from units, agencies and directorates of Fort Irwin USAG, said Richard Bertrand – antiterrorism security specialist with DPTMS.

“One of the major objectives was to ensure our emergency operations center was up and running, with everyone [there getting the] experience of being in the EOC and running the EOC,” Bertrand said.

The EOC essentially becomes a hub where its staff, led by a battle captain, can request support or resources from their respective unit or agency and direct those resources to the incident post commander, explained O’Neal. Staff utilized computers and a Web-based interface to share information – including information from the incident command post – which would be posted on screens at the front of the EOC. Leadership monitored the EOC from a different room.

“To digital see, analyze and transfer information within the EOC – that was a significant improvement from last year, because last year we were passing notes,” O’Neal stated.

At the scenarios, first responders went through the steps of moving casualties, detaining suspects, performing triage, transporting casualties by ambulance and air MEDEVAC, and securing the sites with guard forces.

Casualties were taken to Weed Army Community Hospital, where they underwent decontamination procedures before being moved inside the facility, said Joseph Chesnut, emergency management specialist with United States Army Medical Department Activity here. Performing decontamination had been requested for the exercise by MEDDAC leadership.

Chesnut explained his organization also exercised communicating with external agencies, which would be resourced in a real-world situation. Agencies included the Inland County Emergency Medical Agency, the California Governor’s Office of Emergency Services, and United Healthcare.

“It’s really important for us to foster those relationships because of our remoteness,” Chesnut said.

O’Neal said that law enforcement from other jurisdictions had also been contacted.

He concluded by saying that, as with any exercise, improvements can be made, and sustainments included high morale and good cooperation.

“For the most part, we were able to provide the required support to the incident commander,” O’Neal said. 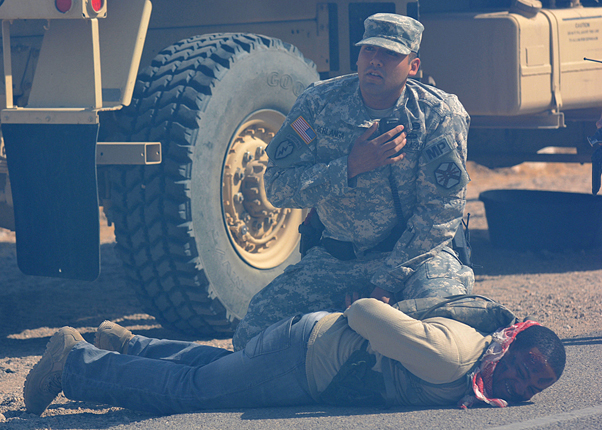 Seen through a haze of smoke from pyrotechnics, Sgt. Robert Berlanga – a Fort Irwin military police officer – holds a “suspect” role-played by Spc. Shawn Grigss, who serves with the 11th Armored Cavalry Regiment.