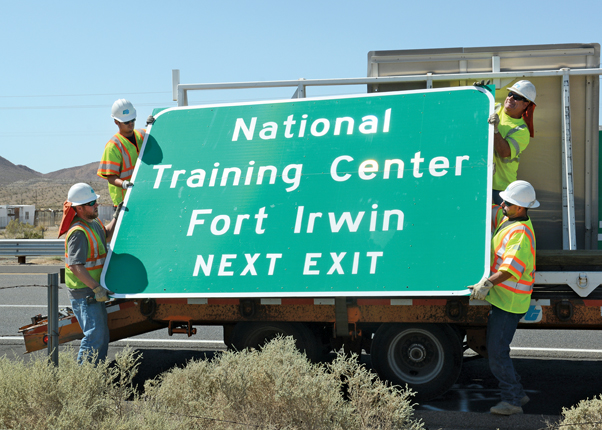 For the first time, the National Training Center and Fort Irwin have been designated together on highway signs near the off-ramps for Fort Irwin Road on Interstate 15.

A crew from California Department of Transportation District 8 (San Bernardino and Riverside County) installed the new signs, June 11. The signs were placed on the northbound and southbound sides near the exits, 189, for this military installation.

“This is a milestone for the National Training Center,” said Col. Jon Braga, commander of Fort Irwin United States Army Garrison. “This is the Army’s premier training center and the largest Army installation in California. Fort Irwin has been here since the ‘40s and the National Training Center has been here since 1979, so it’s a great feeling to be identified on the California highway system. Fort Irwin thanks the California Transportation Department for giving us this signage.”

The maintenance lead worker for the sign crew, Anthony Pence, said the signs last about 10 years. Crews check highway signs at night for reflectivity and if they are less than 50 percent reflective, they are changed.

The sign on the southbound side required poles to be put in the ground, with holes made by a large auger. The crew completed the work in approximately 90 minutes. Efficiency is needed, due to the crew being on the side of a busy interstate.

“The crew is amazing,” Pence said. “Everybody knows what they’re doing. We’ve been together for a while.”