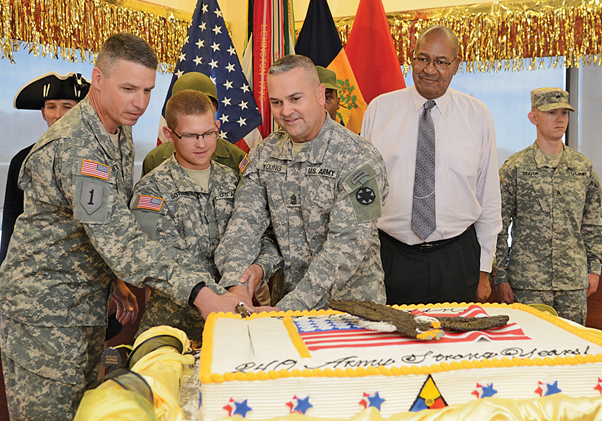 National Training Center and Fort Irwin Soldiers, leadership and the community paid homage to the Army’s 240th birthday at a celebration here, June 15.

The NTC and Fort Irwin Commander Brig. Gen. Joseph Martin addressed an audience gathered at dining facility 1  prior to the cutting of a cake and a special meal.

Martin described the celebration as one of many things that sets the United States Army apart from just about any other organization.

“We’ve been doing this business for 240 years, since 1775,” Martin said. “Today we celebrate the character, competence, and commitment of Soldiers who make up the nation’s premier all-volunteer Army.”

The general explained that values and ethics are fundamental to the Army.

“Selfless service is the bedrock value of this profession,” Martin said. “The Army’s continues to demonstrate its incredible competence, enduring commitment and extraordinary character in the defense of our nation every day. Those are things that set us apart as professionals. There are many professions, but none like the one that we’re all involved in.”

Sotelo, a Kansas City native, arrived here to his first duty station, May 25. He said it was an honor to have been recognized and have participated in the ceremony.

After the cake was cut, the post commander expressed appreciation to the 11th Armored Cavalry Regiment and DFAC employees for putting on the event. Cut

“I want to thank the regiment and the staff of DFAC 1 for an incredible spread, an incredible cake and an incredible celebration – one of many traditions that sets us apart from any other organization,” Martin said. “Let’s give them a round of applause.”