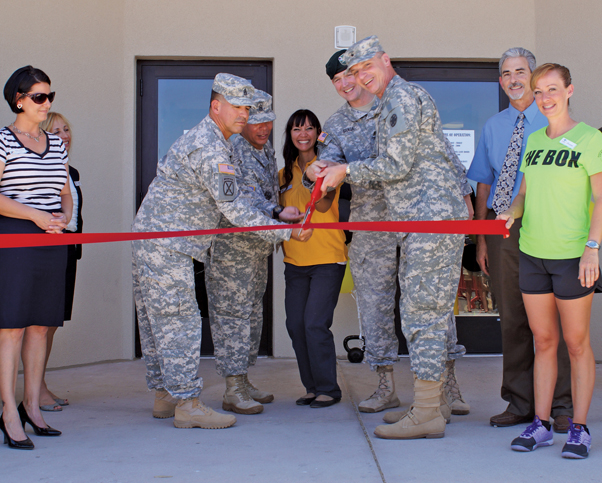 Walk into Fort Irwin’s recently made-over fitness center and you see clues about what it used to be – a gym with hardwood floors and basketball backboards.

Now, as you enter the Fort Irwin’s new Resiliency Center, you’ll find a Fit Foods display counter and refrigeration cases with sandwiches, fresh fruits, and salads. Turn the corner, and you see three sides of the building are laid out with gymnastic rings, exercise mats, spinning machines, and at the back, a rock climbing wall. What was once mostly a basketball arena is now The Box.

“We got our name from what Soldiers call ‘The Box,’ NTC’s training ranges, but The Box here is for a different kind of training,” said Gemma Day, facility manager for The Box. “It’s to train Soldiers in overall readiness and fitness.”

There’s another reason for the facility name. Day pointed to the several wooden boxes of different sizes placed around the open area.

“The boxes are for biometric drills, that people can jump on as one of their fitness exercises,” Day said. “Those less fit can step up on smaller boxes. They can modify their training, based on their individual needs and goals.”

Day said she and her staff of three other certified fitness trainers will help the community here, including family members of Soldiers, DOD civilian employees, and military retirees.

“Not only Soldiers, but civilians, too,” Day said. “Not only people who are already fit, but civilians who sit at desks, sit in their cars going off post and on post. We want them to be able to come in here and feel that we can help them reach their fitness goals.”

Day said she and her fitness trainers will help users of The Box develop fitness for functional movements, not isolated repetitive movements to develop isolated muscle forms.

“You’ll be using most of your body to do functional movements, things that you do every day,” Day stated. “When you stand up and then sit down, basically, what you are doing is a squat. So, we’re going to strengthen your squat. Because that’s a functional movement.”

The Box is just the beginning, according to Dana Spalding, chief of sports fitness and aquatics for Fort Irwin’s Morale Welfare and Recreation Directorate. Over the next few months, other areas of the building are being renovated, including a chiropractic treatment room, a hydrotherapy room for hot and ice baths, a sauna, and a massage room. Classes will be held for yoga, Olympic weight lifting, and nutrition.

More than a facility, Fort Irwin’s Resiliency Center is designed to be a one-stop shop staffed by MWR recreation specialists and Army Medical Department specialists in nutrition, physical therapy and fitness assessment experts.

“We spent so many years focusing on war and defending our nation,” Spalding said. “Now it’s time to focus on being resilient, on healing.”

In his remarks during the ribbon cutting ceremony for the resiliency center on June 15, garrison commander Col. Jon Braga shared his vision for the center.

“Gemma [Day] knows that if you have people walking into these doors five months from now, mostly with zero percent body fat, and others who are super, super fit, then we’ve kind of failed,” Braga said. “Help get the word out. We want everyone to come over here and get a little bit better quality of life. There are so many things to make that happen.”