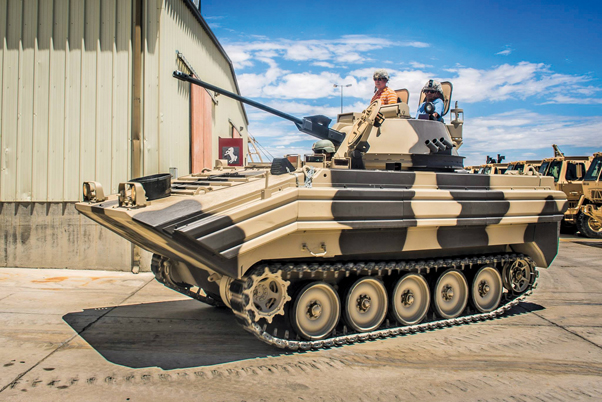 From across the country, Veterans from the Blackhorse Association, along with their families, attended a homecoming with the 11th Armored Cavalry Regiment here, June 12.

Buses arrived mid-morning at the National Training Center and 11th ACR Museum, where Veterans were greeted by regiment Troopers, who literally rolled out red carpets for their arrival.

Snodgrass added that it is more than simple admiration for the 11th ACR that brings Veterans home to the unit. It’s all part of knowing that they left the regiment in able hands.

“We strive to keep our relationship alive and meaningful,” Snodgrass said. “We really do want to know how our regiment is doing these days.”

After spending a short time receiving a welcome from Troopers, members of the Blackhorse Association toured the museum. The facility houses artifacts dating back to the regiment’s inception in 1901 to equipment used in Vietnam to uniforms and signs present during the fall of the Berlin Wall, which the Blackhorse oversaw.

Following a trip through the museum, Veterans were escorted to the Regiment Sustainment and Support Squadron motor pool, where they were given demonstrations of the Opposing Forces Surrogate Vehicle, a modified version of the M113 Personnel Carrier, commonly used throughout the Vietnam War. Today, the 11th ACR uses the OFSV to replicate enemy forces while preparing the Army for world-wide deployments. Veterans and their family members were given the chance to get familiar with the OFSV and were even given a ride. Later, the regiment gave Veterans a chance to take-on some active duty Troopers in a simulated squad exercise involving small-arms combat.

The day closed with a visit to the 11th ACR Horse Detachment, one of the only active duty horse platoons left in the Army. The detachment gave a tactical riding demonstration for the Veterans to relive their common history and to give tribute to those Troopers who came before them.

Spc. Lauren Hameister, a wheeled vehicle mechanic with Maintenance Troop, RSS, 11th ACR, explained that many of the Veterans were glad to see that not much has change within the regiment, but the things that have changed have been for the better.

“Our Veterans were proud because they said that out of all the other units they had been to, this is the one that has kept tradition alive,” Hameister said.

“We – old and new – are very much alike,” Snodgrass stated. “We are honored to serve (or to have served) in a great unit, dedicated to serving our country proudly, and willing to do whatever is necessary to secure our nation’s freedom anywhere and anytime.”