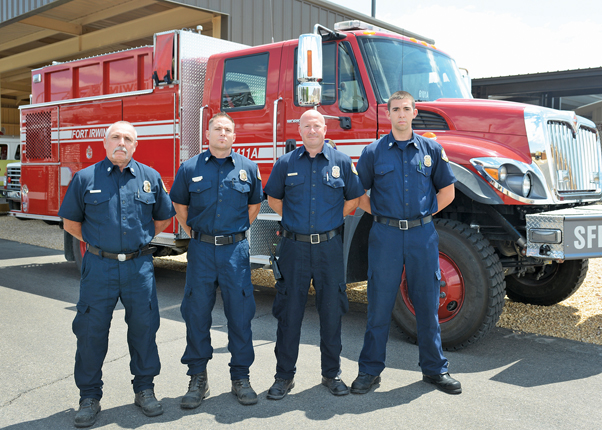 Approximately 2,000 firefighting personnel served to suppress the recent Lake Fire (which as of July 15 was 98 percent contained) in the San Bernardino National Forest in Southern California.

Those personnel, part of a firefighter brotherhood, included four staff from the Fort Irwin Fire Department. The department received a call for assistance in fighting the blaze (which started June 17) on the afternoon of June 24, said Capt. Rhett Warsaw, who is captain of medic engine 411 for B shift. He and three additional fire fighters heeded that call. They are: Eric Evans, firefighter paramedic, who has served here since September 2014; Eddie Plaxton, firefighter, who has served here nine years, and; Wayne Van Luven, engineer, who has served here 23 years. The crew stayed on scene through June 27.

The fire burned south of Big Bear, according to www.InciWeb.com – which is an interagency all-risk incident information management system. The Web site reports, that as of July 15, 150 personnel continue to serve and that the fire affected an area of 31,359 acres. There have been six minor firefighter injuries. One residence and three outbuildings were destroyed in the northeast portion of the fire.

Warsaw stated that the event was considered a wildland or forest fire, but the fire had the potential of reaching urban areas. Their priorities as firefighters, at any time, are: Life, property, environment. His group had a primary objective to protect a housing area and they assisted in Camp Oakes, Hamilton Ranch, Irwin Lake and Lake Williams.

“We were assigned to prep an area that the fire was making a ‘run’ towards, which involves clearing brush and vegetation that could possibly burn if the fire ran through that area,” Warsaw said. “So, we constructed … a fire break in case the fire … blew up in that area.”

Plaxton said they performed a lot of work in Camp Oakes, which evacuated 400 children the day they arrived. The next day, they worked all day prepping the area in case the fire ran through.

Evans added that agencies from across the country supported the firefighting efforts. He described a map he saw at the incident command post showing locations of origin for personnel.

“They literally had a pin almost on nearly every state in the U.S. from where crews were from,” Evans said.

When many departments come together, the camaraderie is real good, said Warsaw. The support for the fighters is also robust and impressive.

“It’s a giant portable machine they can take anywhere and set up logistics for 2,000 firefighters to stay there for weeks,” Warsaw said.

Fort Irwin Fire Department Chief Kenneth Ray Smith said that Fort Irwin is part of the California Master Mutual Aid Program, which is comprised of nearly every fire department in California. In case of major emergencies, the program allows departments to be resourced for assistance.

“It’s important that we’re able to assist these other communities in time of need, and if we should have something in the Fort Irwin community, were we need those resources, we know we can call upon them to come help us,” Smith said.

Smith said that his personnel are trained to California and Department of Defense standards in structural firefighting, rescue, hazardous materials, confined space, and wildland firefighting.

The fire chief, who has headed the department for five years and has served here for 32, praised his personnel for having a sense of community, being part of a brotherhood, and helping those that need help in time of need.

Firefighting and being a Soldier have similarities, because “whether it’s fighting fires or fighting the enemy, there’s something inside these professionals that inspire them to do what they do,” said Smith.