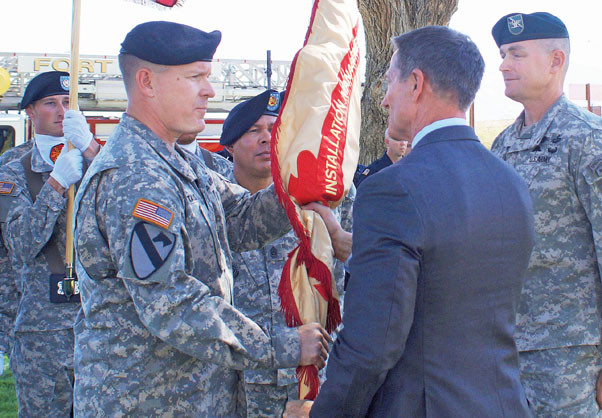 The son of a former commander of the National Training Center took the leadership role for the garrison here during a ceremony, July 15.

During the change of command, Col. Jon Braga relinquished the top spot at garrison after leading for two years. His next assignment takes him to Special Operations at Fort Bragg, N.C.

Scott arrived here from Korea, where he previously served as the 2nd Infantry Division’s assistant chief of staff, G3.

“Like Jon, Scott Taylor is a proven combat leader,” Schoenbeck said. “He led our Soldiers during three deployments into harm’s way. He is ideally suited to lead the Fort Irwin garrison team in supporting the priorities and requirements set by the senior commander, Brig. Gen. Joseph Martin, and the Installation Management Command priorities set by Lt. Gen. Halverson.”

In his first address to his new command, Taylor noted his roots in the Fort Irwin and local community.

“As an Army brat, this place is as much a home to me as any other place I’ve lived – in fact, I graduated from Silver Valley High School … I truly feel this is a homecoming and look forward to reconnecting with the fantastic community that does such great work partnering with and supporting the National Training Center,” Taylor said.

Taylor credits his dad, Lt. Gen. (ret.) Pete Taylor, for helping inspire him to become an armor officer. The senior Taylor served as NTC commander during the years 1986 to 1988.

“In fact, it was during a trip to ‘the box’ with my dad almost 28 years ago that convince me that I wanted to become a tanker,” Taylor said.

Also during his speech, Schoenbeck spoke about Braga and some of the challenges he dealt with during command.

“Jon led this installation team through power outages and a 100-year flood,” Schoenbeck said. “And like our resiliency programs for our Soldiers, this installation and the people here demonstrated resiliency by bouncing back. He dealt with the good, the bad and the ugly … I never heard panic in his voice. … Jon, your leadership and accomplishments here at Fort Irwin will stand the test of time.”

In his farewell remarks, Braga gestured to a sign in front of the garrison headquarters, saying, “in a few moments, my name will come down from that sign right there and it reminds me of … the great statesman Pericles, who once said, ‘What you leave behind is not what is engraved in stone monuments, but what is woven into the lives of others.’”

“I know I speak for Melanie, the kids and I – that this garrison team, this community, will always be woven into our lives,” Braga said.

Taylor was born in Columbus, Ga., and was raised on or near Army installations in several states. After receiving his commission after graduating from the U.S. Military Academy in 1992 with a bachelor’s of science in international relations, he began his Army career at Fort Knox, Ky., where he completed the armor officer’s basic course, the dismounted armored scout’s course and ranger school. His first duty assignment as an armor officer was at Fort Stewart, Ga., with the 24th INF DIV (Mechanized). After reassignment in 1996 to Fort Hood, Texas, Taylor commanded A Troop and later, Headquarters and Headquarters Troop, 1-7th Cavalry DIV. He was then reassigned in 2000 to Combat Maneuver Training Center in Hohenfels, Germany as an observer/controller. After attending the Command and General Staff College at Fort Leavenworth, Kan., he returned to the 1st CAV DIV, Fort Hood in 2004, from where he deployed to Iraq in 2006 during Operation Iraqi Freedom II and again during “the surge” in Iraq.

Upon redeployment, Taylor served as executive officer and deputy commanding officer of 1st Brigade Combat Team, 1st CAV DIV. He then was assigned to Fort Carson, Colo., where he served with the 4th INF DIV. Later, as a battalion commander, he led the 1st Combined Arms Battalion, 68th Armor Regiment during its deployment to Basra, Iraq in March 2010, returning all 1,100 of his Soldiers home to their families the following March.

After attending the U.S. Army War College in Carlisle, Pa., where he earned his second master’s degree in national security studies, Taylor served on the Army Staff in the Pentagon as deputy chief of contingency operations. He was then assigned to Korea in 2013, serving as the 2nd INF DIV assistant chief of staff for operations, before coming here.