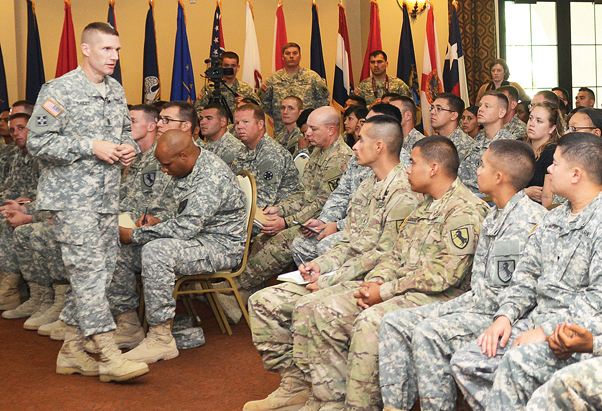 Sergeant Maj. of the Army Daniel A. Dailey emphasized the importance of the mission of the National Training Center, which trains 10 brigades per year, and was the site of Exercise Joint Forcible Entry Dragon Spear (Aug. 5-6) during a visit here, Aug. 4-6.

“The National Training Center is the premier training location for the United States Army, and the job our Soldiers, Family members and our great civilian team here are doing is paramount with regards to the way we need to train and educate our Soldiers for the future,” Dailey said. “Readiness is important. The chief of staff of the Army, the secretary of the Army – we hear them say that consistently and the National Training Center is doing just that, building readiness for our forces, so they’re ready to be globally engaged when that time comes.”

Dailey stated that NCOs from throughout the Army should aspire to serve at the NTC and on Fort Irwin.

“This is one of those assignments that builds character, builds diversity with our noncommissioned officers [NCOs] and gives them the ability to be able to see how other organizations train and utilize their Soldiers throughout the battlefield,” Dailey said. “It’s an opportunity for them to broaden their experience and build upon the knowledge, skills, and attributes they need to go back and effectively train and lead Soldiers in the future in other organizations.”

During his visit, Dailey received a briefing from Maj. Michelle Agpalza, manager of the installation sexual harassment/assault response and prevention, and ready and resilient programs. Sexual assault response coordinators and civilian employees of the Fort Irwin Advocacy Center also attended the meeting and spoke with Dailey about the SHARP campaign.

Dailey’s initiative “Not in My Squad” augments the current SHARP program throughout the Army. He has described the proposal as an effort to empower junior NCOs to make an impact at the lowest levels within the ranks.

“This is really a grassroots approach, at getting at the heart of the problem … That is young squad leaders, young Soldiers down there – those really are the ones who have to say at the end of the day, whether or not they’re going to fix the problem,” Dailey said.

Dailey said that he would like to see the Army’s SHARP program evolve to encompass a more positive approach.

“I think we have to change the tone of the SHARP program,” Dailey said. “I think it was very good to come in very hard and very heavy at first, but now the perception across the Army, at least from a Soldier’s perspective … it’s very negative. It’s starting to cause a divide between males and females in the Army, where we don’t want to talk to each other and that’s not the intent. The goal is success – an environment conducive for everyone to succeed, where everyone works together and prospers.”

The sergeant major said that there needs to be a change in culture, where “it’s okay to talk to SHARP representatives, it’s okay to report.” Also, a positive culture permits bystander intervention to increase.

Later, at a town hall with sergeants major and senior NCOs, Dailey spoke about a fellowship program available to sergeants major. The one-year education program offers fellows a master’s degree and an additional three years of service in the Army. During the master’s studies, fellows focus on their academics, Dailey said. After graduating, they will serve as instructors at the U.S. Army Sergeants Major Academy on Fort Bliss, Texas.

Dailey briefed other initiatives and improvements he is working on including: enlisted professional military education, one Army school system, credentialing that is equivalent to civilian academics or training, ensuring Soldiers are trained to support regional alignment, performance triad, and personal readiness as it relates to Soldier deployability.

Daily, a career infantryman, stated that all Soldiers in the Army should be deployable. Approximately 45,000 Soldiers are currently not deployable. The American public pays and expects the Army to fight and win our nation’s wars, Dailey said.

“Your efforts do not go without great gratitude from the leadership of the United States Army,” he said. “This is an important mission out here and critical to the survival of the United States Army and is critical to our success in the future. I know this duty station is tough at times and has its challenges, but you are making a lasting impact on the future of the Army and securing our foothold in the nation and throughout the world.”