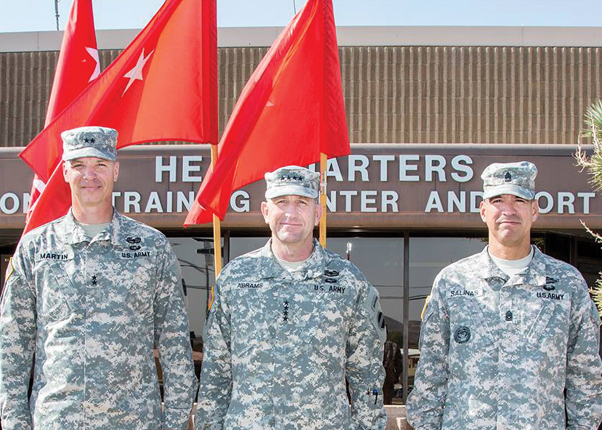 Abrams observed force-on-force rotational training between the 116th Cavalry Brigade Combat Team and the NTC’s 11th Armored Cavalry Regiment. The 116th CBCT – of the Idaho Army National Guard – is headquartered near Boise, Idaho, and has units based in Oregon and Montana.

A graduate of the U.S. Military Academy, Abrams previously commanded III Corps at Fort Hood, Texas, before most recently serving as former Secretary of Defense Chuck Hagel’s senior military assistant. He is the son of former Army Chief of Staff Gen. Creighton Abrams and brother of Gen. John N. Abrams, a former commander of U. S. Army Training and Doctrine Command.

As the Army’s largest major command, FORSCOM consists of more than 800,000 active-duty and Army Reserve Soldiers, including 10 active component major subordinate commands and the U.S. Army Reserve Command. Its mission is to prepare “conventional forces to provide a sustained flow of trained and ready land power to combatant commanders in defense of the nation at home and abroad.”

The NTC at Fort Irwin annually trains approximately 50,000 military active duty and reserve personnel from all services to ensure their readiness to deploy in combat and contingency operations around the world.