Two UH-60 Black Hawk helicopters kicked up dust on a hilltop in the Mojave Desert as Soldiers piled out, hit the ground and established security during a practice air insertion here, Aug. 20.

Air insertions were just one of the tasks the 1-183rd Aviation “Task Force Talon” executed in support of the 116th Cavalry Brigade Combat Team’s rotation, Aug. 14-25. The 1st Battalion, 183rd Attack Reconnaissance provided 12 AH-64 Apache helicopters and a company of pilots to support the rotation. Battalion leadership oversaw command and control of the task force.

Composed of Army National Guard units from six states, the 1-183rd Aviation Task Force consisted of an attack aviation company and multiple companies of general support aviation assets. Each airframe had a unique mission, and the units’ Soldiers trained to increase their proficiency as pilots, support personnel and maintainers. Together, Task Force Talon ensured the 116th CBCT had the advantage when it came to fighting, moving Soldiers and equipment, and medical evacuation support.

“The ability to bring together units from six different states and come together as a task force, move out to the field and execute operations, really demonstrates the level and abilities of National Guard Soldiers to work as a team,” Schoonover said.

“The other states’ units operate in a different environment and they haven’t conducted dust or mountain-top landings,” said Sgt. Jason Tugby, of Boise, Idaho, a UH-60 Black Hawk crew chief with A Company, 1-168th GSAB. “We have been training together, so the Maryland and Virginia pilots have experienced a new style of flying and it will increase their abilities.”

Pilots flying one of the most advanced attack helicopters in the world practiced their target acquisition skills during live-fire gunnery in support of the ground combat units. After gunnery, they transitioned to supporting the ground units during a three-day, force-on-force mission against the opposing force.

“This training allows us to see the big picture and how we would be utilized,” said Chief Warrant Officer-3 Mike Barbero, from Boise, Idaho, with C Company, 1-183rd ARB. “It is a little different than when we go out and plan our aviation-based missions; now we are fighting with the ground commander.”

“We have been conducting missions moving the Battalion and brigade commanders who want to see their troops to check on their condition as well as critical repair parts,” said Warrant Officer Derrek Bohman, of Boise, Idaho, a Black Hawk pilot with A Company, 1-168th GSAB.

An important mission for the utility helicopters was the air insertion of Soldiers. Crew chiefs conducted training sessions with Soldiers to teach them the proper methods of entering and exiting the aircraft during air assaults. Each Black Hawks transported up to 11 Soldiers and their gear, while Chinooks carried 36 Soldiers, but it wasn’t a bus ride for the Soldiers. The pilots typically flew fast and low to the ground to avoid enemy contact. Like a shell game, the pilots executed false insertions to protect the location of the real insertion.

“We completed an air assault mission behind enemy lines, so the forward observers could coordinate for Apache air support during the battle,” Bohman said. “The mission took a lot of time to plan and coordinate between the aviation and ground units, but it was a success. We got them in undetected, and they completed their mission successfully.”

Another vital mission of the Task Force was to provide MEDEVAC support, which could be completed by HH-60 Black Hawks staffed by a crew of medics and medical equipment.

Maintenance and logistics was also critical to the success of Task Force Talon.

“The maintenance of the helicopters is going very well,” said 1st Lt. Jordan Dosch, of Boise, Idaho, a maintenance platoon leader with D Company, 1-183 ARB. “All of the Apaches are fully mission capable except one that received notional ‘battle damage.’ Morale is highest when the Soldiers get to do work on the Apaches to bring them back into operational status.”

Getting parts to the helicopter mechanics was the responsibility of E Company, 1-183 ARB, as was pumping bulk fuel into the fleet. Mechanics maintained the task force’s vehicles and the cooks fed the task force.

By being focused and armed, the 1-183rd Aviation Task Force became a battlefield multiplier for the 116th CBCT. Without the team of pilots, mechanics and support personnel, the more than 20 helicopters would not have made it off the ground. Each airframe had a particular mission, but every Soldier was essential to winning the fight.

“Each Soldier in the task force is a contributor to the success of this organization,” Schoonover said. “This training shows how vigilant, prepared and ready to support our nation’s defense the National Guard is.” 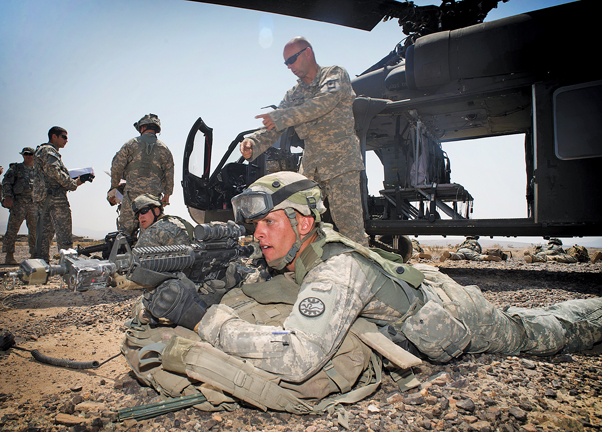