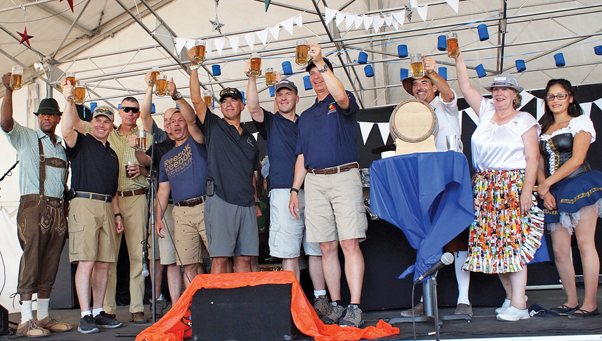 The National Training Center’s first Rocktoberfest – a Fort Irwin-styled tribute to the German Oktoberfest – started with a VolksParade at 3:30 p.m. from Shock Wave, Sept. 26

The enthusiasm of the few dozen paraders sizzled even hotter than the late summer, afternoon sun. Some chilled out with a taste of the brews to come along the parade route. Following their return to Shock Wave, NTC Commander Maj. Gen. Martin kicked off the festivities with a keg-tapping ceremony and robust toasts in a beer tent behind Shock Wave at 4:30 pm. Some revelers dressed in traditional German attire added to the gemutlichkeit that added more zest to the taste of German beer and food.

As the moon rose in the eastern sky, many hundreds more turned out for the evening fun sponsored by Fort Irwin Family and Morale, Welfare and Recreation Directorate. Children and adults alike enjoyed browsing and tasting through the smaller vendor tents and tables set up in the SunSation area behind Shock Wave, rock climbing and RZR rides set up in the area, as well as sharing some good times and stories with families and friends.