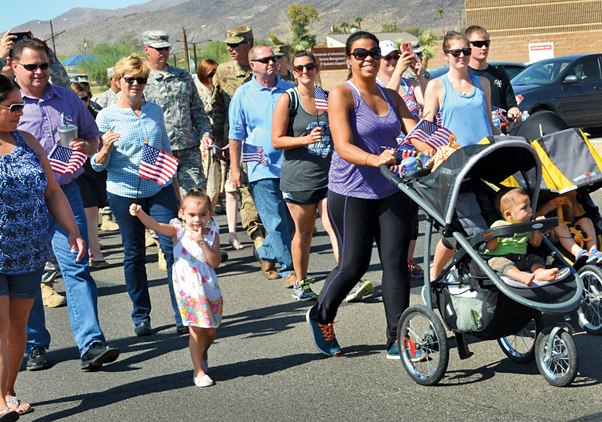 National Training Center and Fort Irwin leadership, Soldiers and the community paid tribute to the victims of the September 11, 2001 attacks with a remembrance walk and a memorial service, Sept. 11, 2015.

The remembrance walk began at Army Field on this military installation and continued to the center chapel. The NTC and Fort Irwin Commander Maj. Gen. Joseph Martin walked alongside command teams of installation units.

Taylor explained the event was a way to recognize and remember the significance of that day, 14 years ago. He added that “we want to take a moment today to pause and reflect on the sacrifices made by so many.” He explained that sacrifices were made by victims of those horrific attacks and those serving and supporting the nation’s military in response to the attacks.

Fire fighters of the Fort Irwin Directorate of Emergency Services operated one of three fire trucks still in existence that responded to the attacks on the World Trade Center in New York City. The vehicle, New York City Fire Ladder Truck 152, will be part of a September 11 memorial to be built here.

At the memorial service held at the center chapel, prayers were conducted by Army chaplains and Martin spoke to the audience.

“Thank you for taking the time out of your busy lives, so we can share these moments to pause and reflect on, and remember what happened on this fateful day 14 years ago – thousands of miles away on the east coast in a vacant field in Somerset County, Pennsylvania, at the Twin Towers in New York City, at the Pentagon in Washington D.C. – events that change our lives forever and those of generations to come,” Martin said. “Thank you Silver Valley High School and Fort Irwin Middle School, students, teachers and staff for waking with us this morning. It was an honor to walk with you.”

Martin continued, “I also would like to the thank members of Fort Irwin’s finest – our Directorate of Emergency Services, military and civilian police, our firefighters, our chaplains and their staff, who arranged the memorial ceremony today. Can we please give them all a round of applause.”

The terrorist attacks resulted in the loss of 343 firefighters and EMS personnel; 60 law enforcement officers; 125 Pentagon staff; 2,753 civilians, and; more than 7,000 United States military personnel, who perished since Sept. 11, 2001.