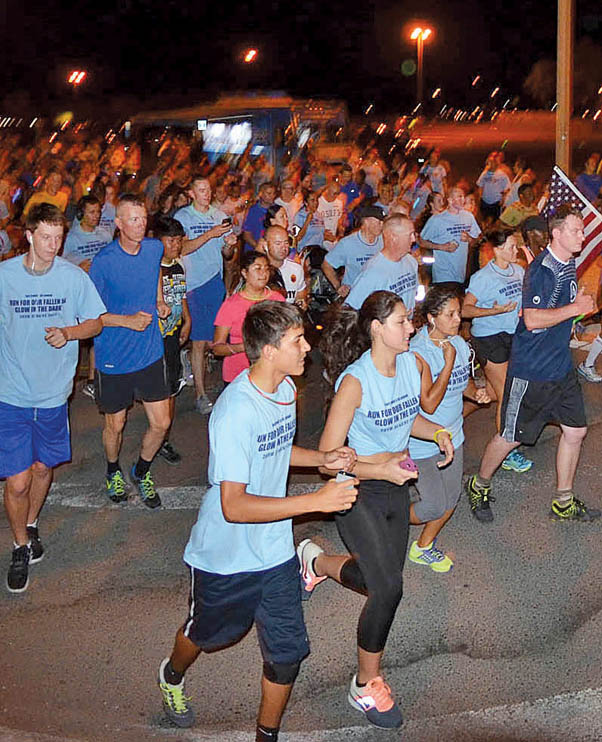 More than 300 runners participated in a special Run for the Fallen 3.1 mile “Night Glow Run” held across Fort Irwin, Aug. 28.

The run honored servicemembers, who lost their lives while serving in the wars in Afghanistan and Iraq, and their families. In remembrance of the fallen, runners were encouraged to wear blue.

Hundreds of spectators lined the route at sunset to cheer and encourage runners as they made their way through a winding route across post.

The idea for the special “Night Glow Run” came from Kara Johnson, merchandise coordinator at the Fort Irwin Exchange, and was a new twist on a familiar event to make it more enjoyable and memorable for the runners. The color blue is designated as a sign of solidarity with the fallen and a symbol of compassion for families by a runners group called “Wear Blue”.

Wear Blue is a national non-governmental, all inclusive support organization that promotes running to remember fallen military members and their families. The organization also seeks to build running communities that honor the service and sacrifice of the American military. Their goals include acting as a support network and a bridge between military and civilian communities, according to their Web site.

The event was coordinated by Capt. Yesenia Byrne, chief of Managed Care/Clinical Service Division at Weed Army Community Hospital here. Byrne was instrumental in publicizing the event and organizing volunteers to help with the run.

“Every step we take is a living memorial that remembers the lives that were sacrificed, their families and those Soldiers still fighting,” Byrne told the assembled crowd of spectators and runners before the race. “It’s our honor that Fort Irwin hosts the ‘Wear Blue’ community run to remember the fallen.”

During the opening ceremony in front of the Exchange, the name of each servicemember killed in the month of August was called out by runners in a special tradition known as the Circle of Remembrance. Afterwards, runners called out the names of those they personally remembered – their husbands, wives, parents, siblings, battle buddies, neighbors and friends.

Large photographs of fallen servicemembers as well as American flags lined the route in honor of the fallen. A special tribute called the “Wear Blue Mile” – a section through Fort Irwin’s town center – was lined with an abundance of flags and photos honoring the fallen.

“This event really exceeded expectations, and not only the number of people from every part of the community who turned out for it,” Byrne said. “I really shouldn’t have been surprised at all because this is so typical of the Fort Irwin community, the National Training Center and my Weed Army Community Hospital colleagues. Maybe it’s because our post is so isolated out here in the Mojave – we don’t just work together, we celebrate together, we mourn together, we run together and we remember together.”