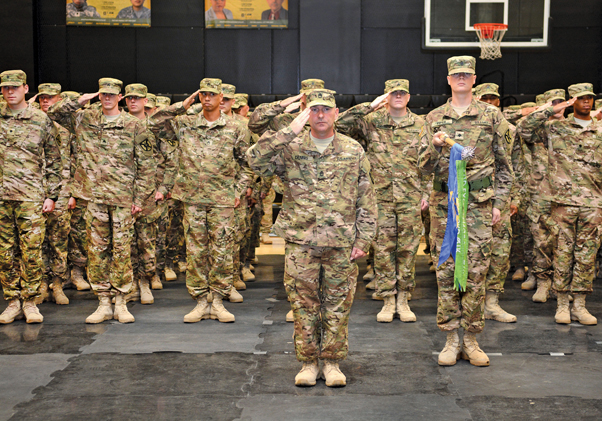 The “Flying Tigers” company from this installation deployed in mid-October to Afghanistan in support of Operation Freedom’s Sentinel.

The Soldiers were honored in a deployment ceremony, Oct. 5, which was attended by National Training Center and Fort Irwin Commander Maj. Gen. Joseph Martin, along with other installation and unit leadership, Soldiers, families and community members.

Garber said B Company Soldiers are prepared to deploy “knowing freedom is not free and stand ready to defend it at all costs.”

“The Flying Tigers stand ready – they’re trained, they’re outfitted with the latest technology and the equipment to bring the fight to the enemy,” Garber said. “The MQ-1C Gray Eagle will provide a tremendous capability to the ground force commander. Its ability to provide that vast distance of penetration – to go where no manned aircraft can possibly go and to provide that unblinking eye and when necessary, deliver that precision strike. It’s an awesome game-changing weapon and I’m very happy that the Flying Tigers are on our team.”

Poler praised his Soldiers, non-commissioned and commissioned officers for accomplishing their tasks in the past year, even when challenged with insufficient time, resources and people. He also appreciated the families for their support of the unit.

“These Soldiers can’t do the great things they do without you,” Poler said. “This deployment will be as much a burden for you as it will be for those you send forward. But, know that not a minute will go by when we don’t think of you and thank you for your dedication … dedication very few American families can understand.”

Valeri said another deployment isn’t easier, but there was better planning between she and her husband this time.

Caroline Smith, spouse of Staff Sgt. James Smith Jr., – a UAV maintainer and squad leader with the Flying Tigers – commended the FRG leadership, which is normally the spouses of the unit’s command team.

“I think they’re going to be doing a really great job,” Caroline said.

“Families need to reach out to the rear detachment and the FRG as much as possible and try to pull information as well as [receive] information,” Rodriguez said. “If there is something they feel they’re not getting, don’t hesitate to reach out and ask the questions.”