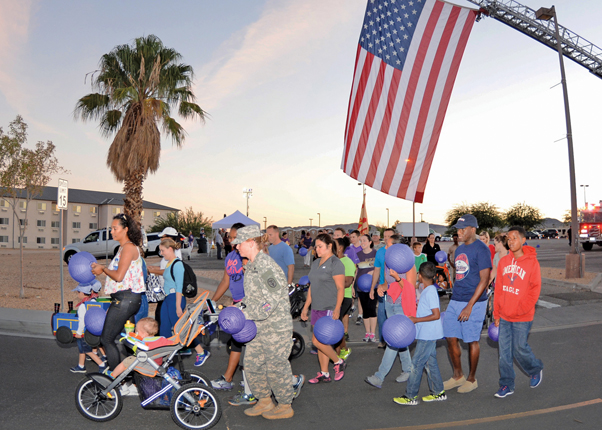 National Training Center and Fort Irwin leadership, unit commanders, Soldiers, and family members participated in the event that included the signing of a proclamation, remarks by leadership and a procession of attendees through several streets on this garrison.

Fort Irwin United States Army Garrison Commander Col. Scott Taylor addressed the audience prior to the start of the walk. He thanked everyone for attending and read a proclamation he signed with Maj. Gen. Joseph Martin, commander of the NTC and Fort Irwin.

“In recent years there has been an upward trend in substantiated cases of domestic violence in the Army,” Taylor read from the proclamation. “It is important to realize that many causes and conditions contribute to domestic violence and it takes more than the usual effort to reduce that risk. Without every one of us doing our part we cannot say our Army is fully ready to meet the mission of preventing domestic violence. The message … is clear and simple. It starts with respect. Live by core values to keep your relationship healthy and strong. Core values are more than just talk. They are lived and reflected in our everyday practices and interactions just as each branch in the military has a set of core values, so should every healthy relationship.”

After the procession, led by the Horse Detachment of the 11th Armored Cavalry Regiment, the audience gathered around a stage to hear Martin’s remarks.

Martin said that domestic abuse, dating abuse and domestic violence are not in line with Army values.

“There’s no reason why you should raise a hand or abuse someone you’re supposed to care for and love,” Martin said. “Challenge the attitudes and beliefs that promote a culture of violence and victim blaming or shaming. You can also in personal situations hold the abusive person, not the victim, accountable for the abusive behavior, understanding the complexity of it.”

The general explained a new concept for Fort Irwin, called Reunite, which will help families cope with the issues of separation, compression, de-compression, and training in the box and integrating into the battle rhythm of garrison life.

Martin described the three R’s of the Reunite program, which is strictly a Fort Irwin brand.

“Reconnect – it stands for families or loved ones reuniting after difficult periods of separation.”

“Re-new expresses the delivered areas of life where we can regain a healthy sense of purpose as well as affirmation of positive living and make a positive difference in the world around us.”

The commander stated he is excited about the program and the way forward.

“I can look you in the eye tonight and tell you I’m committed to it,” Martin said. “So, stand with me against domestic violence, don’t accept it.”