As the sun rises in the training area each morning, the soft glow casts shadows on uneven ground and animal tracks across the desert landscape, providing evidence of life that thrives at Fort Irwin.

If you look down while walking on loose sand, you may see indentations that look like marks from a miniature pogo stick that terminate abruptly at a small dent or mound in the sand. To an untrained eye, it’s hard to say what made these tracks. However, to the biologists at Directorate of Public Works Environmental, those tracks provide evidence of an astonishing resident, the Mojave fringe-toed lizard (Uma scoparia, hereafter referred to as MFTL). The MFTL will “dive” into the sand to avoid predators, which explains why its tracks sometimes end – with no lizard in sight.

Camouflaged by a light, tan-colored body with a contrasting pattern of black, eye-like spots, you would be lucky to see where a MFTL has buried itself in the sand or is hidden under a shrub. Get too close, and the lizard will likely race away in a sudden burst of speed, running on its hind legs which makes the pogo stick tracks. These sand specialists’ characteristics include: enlarged toe scales (fringes) that enhance efficient movement while running on loose sand; special eyelid and earflap scales that keep sand out; nostrils that can seal while under sand, and; nasal passages configured like a kitchen-sink trap, preventing respiration of fine particles. They are rarely found more than 150 feet from windblown sand habitat.

The MFTL diet is omnivorous, consisting mainly of invertebrates such as ants, beetles, and grasshoppers, but also some plants, and occasionally lizard hatchlings. They are active during the day, primarily between 75-95 degrees Fahrenheit, taking cover in small burrows to avoid extreme temperatures during the summer, but hibernate during winter (November – February). The MFTLs are highly dependent on desert vegetation for shade to regulate body temperature and as protective concealment from predators.

Some wildlife thrive amid the tracks left behind by human disturbance. Unfortunately, the opposite is true for the MFTL. The Mojave Desert is becoming one of the fastest developing areas of the country. Unsustainable use of sand dune complexes destroys habitat by trampling above-ground vegetation and destroying shallow root systems. This destruction of vegetation is followed by a decline in insects, reducing MFTL food sources. Sand compaction, introduction of invasive species, danger from being run over, and man-made alterations that interrupt sand movement are also major conservation concerns for this species. The California Department of Fish and Wildlife has categorized the MFTL as a “species of special concern” and the Bureau of Land Management recognizes the species as sensitive. Population declines have been noted across the MFTL range and they are no longer found in some areas.

The presence of MFTLs was first documented on Fort Irwin in 1993 and annual monitoring efforts began in 2007. Annual surveys evaluate the distribution of the MFTL within Fort Irwin boundaries, estimate population density, and make recommendations for management actions in the training area.

While in the training area, stay on established trails when travelling through regions with fine-grain sand to help Fort Irwin conserve this beautiful lizard. If you have questions, call DPW Environmental at 380-5044 for assistance (Monday-Friday, 7:30 a.m.-4 p.m.). Report all sightings of this animal and address information requests to DPW at 380-3740 or 380-2681. 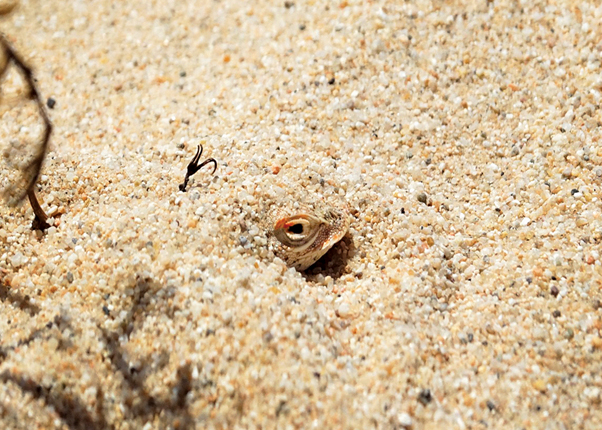 A Mojave fringe-toed lizard peeks from beneath sand at Fort Irwin.