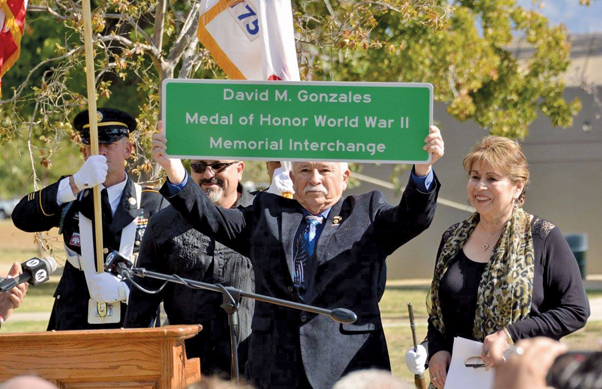 Sounds of freeway traffic could be heard in the park, as a copy of the newly designated interchange sign was lifted into the air by David Gonzales Jr., son of the American hero.

During the ceremony, Gonzales Jr., recalled the loss of his father, but acknowledge all families who suffered loss during World War II.

“My father wears the medal (Medal of Honor), but that medal is for all Veterans, I don’t care what branch you’re in,” said Gonzales Jr.

Gonzales was born in Pacoima and was the first Medal of Honor recipient in Los Angeles County.

He joined the U.S. Army on March 31, 1944, and was assigned to A Company, 127th Infantry Regiment. Nine months after, he faced heavy fighting in the rugged terrain along the Villa Verde trail on the Island of Luzon, Philippines.

During the fierce battle, a 500 pound bomb exploded where his unit was occupied, burying five of his teammates in their fox holes. Without hesitation, Gonzales began digging out his comrades with an entrenching tool, under heavy fire and without cover. Gonzales saved three Solders before he was mortally wounded by enemy fire.

“Private First Class Gonzales gave up his life saving others, he lived up to the Army values,” Taylor said. “These values are not learned after enlistment, they come from home. They are learned from the family.”

On Dec. 8, 1945, President Harry S. Truman, posthumously awarded the Medal of Honor to Gonzales and presented the medal to his surviving family.

Ridgecrest students get a taste of military life