The groups were composed of people in the business and entertainment industry, said Renita Wickes, community relations officer for this installation.

The NTC and Fort Irwin commander, Maj. Gen. Joseph Martin, greeted the visitors after they arrived by bus and UH-60 Blackhawk helicopters to the National Urban Warfare Center above the training village of Razish. He briefed the visitors both days at the NUWC, before they went to Razish to observe training, have a meal ready to eat (MRE) lunch, shoot weapons (blank ammunition) and participate in a scenario within Razish – where they teamed-up with Soldiers of F Troop, 2nd Squadron, 11th Armored Cavalry Regiment.

Martin explained to the visitors that one in 300 amongst the population of the United States has the ability and desire to serve their country in the military. He described the NTC as providing a high fidelity training capability that creates an environment where Soldiers, with all their equipment, deploy to and fight against a hybrid threat in a fictitious country. He stated that engaging the American population is important, so they “understand what we do is critical.”

“When you leave here talk to your friends, your relatives, your colleagues – anybody you’d like – about what we do here at the National Training Center, because you’re our best ambassador,” Martin said. “You can say, ‘I’ve gone there, I’ve experienced it, I have a better understanding of what our Soldiers do and what our combat training centers do to help train those Soldiers. Thanks again for coming today and God bless you all. Thanks for your unconditional support for the Soldiers of our United States Army.”

John Heinsen, vice president of new media for the PGA, said the tour was “absolutely wonderful” and explained that seeing the military on TV does not compare to experiencing first-hand some of the training and meeting the men and women in uniform, which was “really a wonderful thing.”

Peter Lebow, a producer with Instant Films and member of the PGA, expressed his respect for Soldiers and the “extremely difficult job they have to do.”

“We flew in on Blackhawks, we’ve shot machine guns, we’ve toured through training cities, but honestly the most impressive thing has been the people I’ve met, from the commanding general to everybody that’s been helping us [on the tour],” Lebow said. “They’re super intelligent, extremely courteous, respectful – they’re quality human beings. It is an impressive thing to see. I’m honored and proud and grateful that they’re protecting us.” 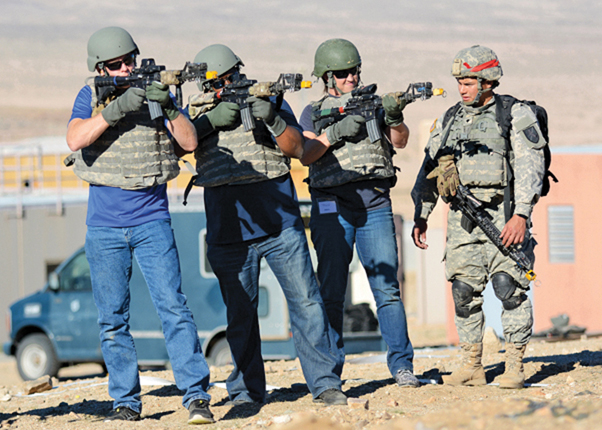 A group of visitors on a special NTC box tour shoot blank ammunition. 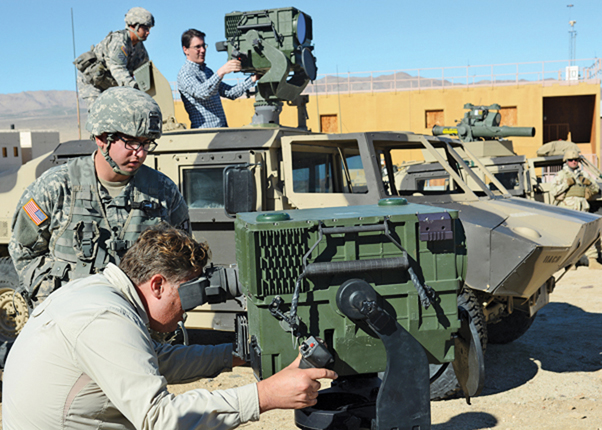 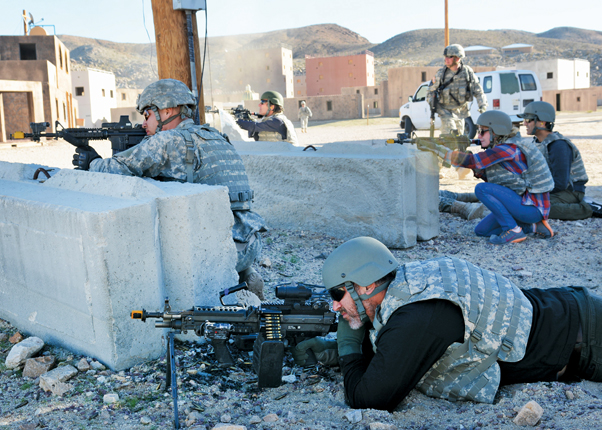