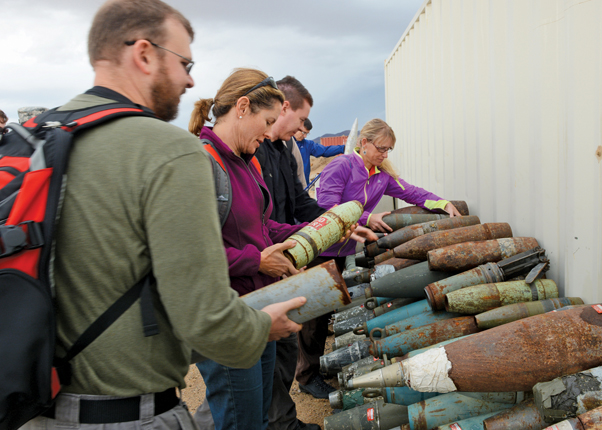 Scientists from various fields and serving in Department of Defense laboratories visited the National Training Center and Fort Irwin, Oct. 16.

Miller stated the visit allowed the scientists to interact with Soldiers and provided them an understanding from a war fighter’s perspective what Soldiers are seeing, what the threat is, and how they react to the threat. The personal interaction helps in the development of better technologies.

Most of the scientists work with detection systems, Miller said. They are involved with detecting chemical agents and explosive residue. Some deal with spectrophotometry and others are analytical chemists. One works with understanding counter measures, which involves treating Soldiers who have been exposed to an agent and protecting Soldiers from getting exposed in the first place.

The group spent a day with Soldiers of the 759th Explosive Ordnance Disposal Company stationed here. Members of the EOD unit shared information about detection processes and equipment. Soldiers explained the use of the Manual Transport Robotic System, a Remote Ordnance Neutralization System and the Joint Chemical Agent Detector alarm. The MTRS involved the use of a Talon and PackBot robot.

The robots give Soldiers the capability to perform reconnaissance, surveillance, and target acquisition on battlefields, as well as the ability to perform access, render safe, disruption and disposal operations on explosive hazards. It is also suitable for peacetime urban scenarios in nuclear, biological, and chemical environments (from Project Manager Close Combat Systems).

Kirsten Taylor-McCabe, a bio-chemist program manager with Los Alamos National Lab, said it wasn’t only her first time at the NTC, but also in the field while supporting the Army. She said the visit gave her a look at technical needs in field operations and hands-on subtleties.

Aleksandr Miklos, a biochemist researcher with Excet Inc., was also on a first trip to this Army combat training center. He is working on a new sensor that detects chemical agents and described the work as interesting and challenging. The field experience has given the scientist (who has a Ph.D. in biochemistry) an opportunity to see equipment, similar to the one he’s developing, being used by Soldiers.

Miklos explained he studied his field many years before being employed and now appreciates being able to assist the armed forces.

The NTC has been very supportive to the 20th CBRNE, Miller said. She mentioned that CBRNE units rotate through the NTC setting-up mock bio-labs and radiological sites for CBRNE training purposes that benefit the Army.

“We’re extremely appreciative of [NTC allowing] us use of their facilities in helping us build up this capability,” Miller said. “So, we come out here and not only train our Soldiers, but allow other units to train on our mock sites.”

Blackhorse rolls out for Rotation 19-04