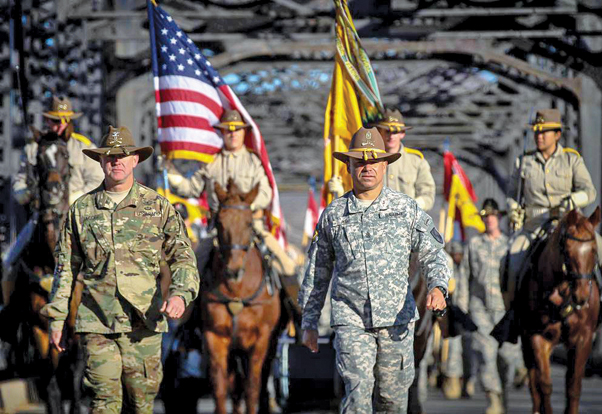 The Regimental Long Walk is a two-day, 38-mile foot march from Fort Irwin to the Veterans Home of California in Barstow to honor local Veterans.

Four ceremonial riders and regiment command teams led the formation, proudly marching in cadence to the Veterans home. Several city residents, students, and downtown shoppers gathered street-side to cheer for the Soldiers, while dozens of observers parked their vehicles to snap photos.

The first Regimental Long Walk was held in 1997 to commemorate the opening of the Veterans home. The event sanctioned active duty servicemembers from the National Training Center and Fort Irwin to give local Veterans a widely-deserving, heartfelt public appreciation. Each year thereafter, the 11th ACR continued the rigorous march as a token of appreciation to Veterans for the sacrifices they have made for our country.

According to Col. Kevin L. Jacobi, 11th ACR commanding officer, the long walk is a small way of saying thank you to Veterans for their service.

“For 19 years we have made this march,” Jacobi said. “This year, we had twice as many participants. It is wonderful to see the spirit of patriotism growing within our community.”

Once the regiment was given the mark-time command at the Veterans home, the Soldiers and residents of the facility assembled for a ceremony in a dining hall. During the ceremony, Jacobi addressed the residents by saying, “Today, we want to say thank you and tell you that the sacrifices made coming before us are secured. The Soldiers want to comfort you and tell you that the gates of freedom are secured because it’s their watch. The men and women in today’s military will not let you down.”

The Veterans and Soldiers spent the remainder of the afternoon sharing snacks, stories, and presentations. Both said they look forward to the annual walk because it enables them to form bonds with each other swapping war stories.

After 19 years, the Regimental Long Walk has become a tradition that residents of the Veterans home would like to see continue in the years to come.