Soldiers with the 2916th Aviation Battalion, 916th Sustainment Brigade here, took to the skies on a training mission deep into the National Training Center, Dec. 3.

The mission was straightforward: deliver a ground force commander with security team, utilizing three UH-60 Blackhawk helicopters, for a 45-minute key leader engagement with the mayor of the training village Barasu.

The task of transporting leadership, via a Blackhawk, is rather routine for A Company, 2916th AV BN – also known as the “Desert Hawks.” They fly senior leaders into the training area several times a month, while rotational brigade combat teams “fight” the NTC opposing force in the same area. However, this was a battalion-level exercise that included assets from: B Co., the battalion’s enemy threat replication aircraft (LUH-72 Lakota, call sign “Sokol”) performing as a friendly attack asset; C Co. air medical evacuation teams, and; Headquarters and Headquarters Company, 2916th AV BN, as mission command and the ground security team.

“Each quarter we conduct a battalion collective training event that allows us to validate the battalion mission tasks and confirm standardization across the flight companies,” said 2916th AV BN Commander Lt. Col. William Garber. “It helps keep our aviation skills sharp for larger operations and provides an excellent venue for leaders to test their skills with a more complex environment.”

Planning an exercise of this scale began days earlier at Barstow-Daggett Airfield and covered route planning, weather, landing zones and intelligence briefs of Barasu and surrounding areas. Information changed hourly and several update briefings were scheduled throughout the day.

As time moved closer to take off, the mission became more complex during an update brief by Capt. William Fry, assistant S-3, 2916th AV BN. Intelligence reported an insurgent target in the vicinity of Barasu, which had to be neutralized prior to infiltration of the ground force commander. The decision was made to have two Sokol aircraft, armed with Multiple Integrated Laser Engagement Systems, destroy the target to provide a safe landing for the Blackhawks at Barasu.

Aircraft lined up at Barstow-Daggett Airfield early with Sokol aircraft leading the flight, but approximately 10 minutes before the flight, Garber’s concerned voice came over the headset:

“You’re burning gas that you haven’t planned on burning. The ground force commander thinks he’s getting 45 minutes of loiter time. Is that still the case?”

Jenkins, piloting a UH-60 replied, “That is less likely based off of the changes. We started engines too early, I will have to compute our new loiter time.”

The commander would later give his feedback during an after-action review, explaining that inaccurate route planning and early engine start cost the ground force commander 10 minutes of valuable engagement time.

During the flight, the Sokol aircraft signaled to the UH-60s over the radio: insurgent target destroyed. Shortly after, the Desert Hawks delivered the ground force commander with security team at Barasu. Once on the ground, the Sokol aircraft could be heard circling the village, providing aerial security. The Blackhawks were sent to loiter in the distance.

After 10 minutes on the ground at Barasu, a large detonation of a training improvised explosive device could be heard near the security team, followed by cries for help and moaning. Those who were role-playing casualties were gathered and a perimeter was set by the remaining security team. Moments later, a radio operator reported the incident and called for immediate exfiltration of the ground force commander and MEDEVAC of injured Soldiers.

Quickly, the ground force commander was exfiltrated by a loitering Blackhawk. Basic medical care of the injured took place on the ground and after several minutes two more “Dustoff” Blackhawks arrived. Rushing from the aircraft, Sgt. Lukas Alvarez and Sgt. Rebecca Martinez – flight medics for C Co., 2916th AV BN – quickly moved from one injured Soldier to the next. After triage was conducted by the flight medics, the remaining security team turned into litter bearers and loaded the injured onto the helicopters. The dust-off team flew the “injured” to the Fort Irwin main post helipad for further treatment.

As fast as the exercise began, the excitement ended. The loitering Desert Hawks returned to Barasu, loaded the remaining security team onto the aircraft and then flew the security team back to Barstow-Daggett Airfield. Immediately following the landing at the airfield, a detailed after-action review began. After the exercise, Garber expressed the unit’s biggest take away from the exercise.

“This particular exercise … focused on the planning process and the air mission brief,” Garber said. “We worked hard on planning and rehearsed the brief several times. It showed. Those tasks were our focus for this event and I was proud to see our junior leaders excel at planning and briefing. I am looking forward to our next event where we can continue to build on our lessons learned in an effort to maintain the Raptor Battalion’s dependable, adaptive and safe support to the National Training Center.” 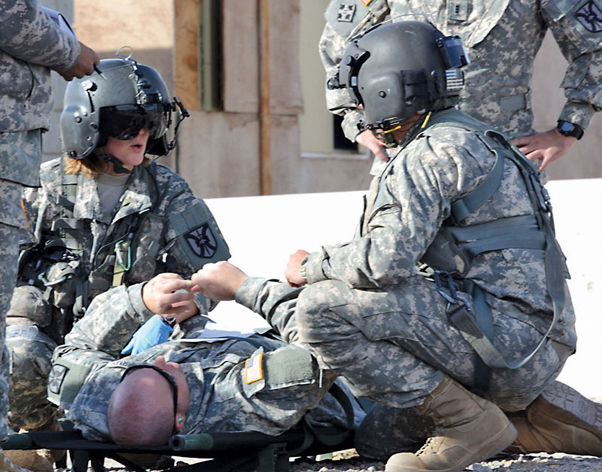