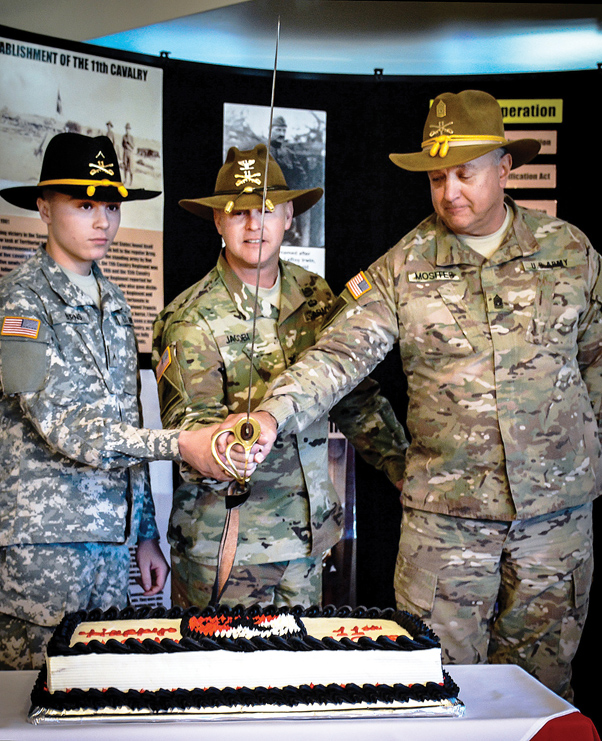 Soldiers, friends and family members of the 11th Armored Cavalry Regiment gathered to honor the unit’s 115th birthday with a special meal and cake-cutting ceremony at dining facility 1 here, Feb. 2.

The 11th ACR was established by a Congressional act to increase cavalry assets within the United States Army. Shortly after the Spanish-American War of 1898, Congress endorsed the addition of five cavalry regiments in order to preserve and strengthen the national defense. On Feb. 2, 1901, the 11th ACR amassed as a unit in the regular army.

Col. Kevin Jacobi, 11th ACR commanding officer, took a few moments to reflect on what the Blackhorse has accomplished during the past 115 years.

“Our history, has been answering our nation’s call of military service around the world,” Jacobi said. “The 11th ACR has served in the Philippine–American War, World War II, Vietnam, the Cold War, Operation Desert Storm, and Operation Iraqi Freedom.”

In tradition of the celebration, Jacobi was joined by the regiment’s oldest Soldier, Command Sgt. Maj. Michael A. Mosites, and youngest Soldier Pfc. Jackson Burns, for the official cutting of the regimental birthday cake with a saber.

Mosites remained in good spirits after being labeled the “old guy” and will soon retire after 30 years of active duty service. For Burns, the day was extra special day because Feb. 2 was also his 18th birthday.

As the pieces of cake were being distributed among the guests, Jacobi thanked everyone for attending and reminded Soldiers to always honor and take pride in the past generations of Blackhorse Troopers.

Despite COVID-19, combat training centers keep Soldiers in the fight