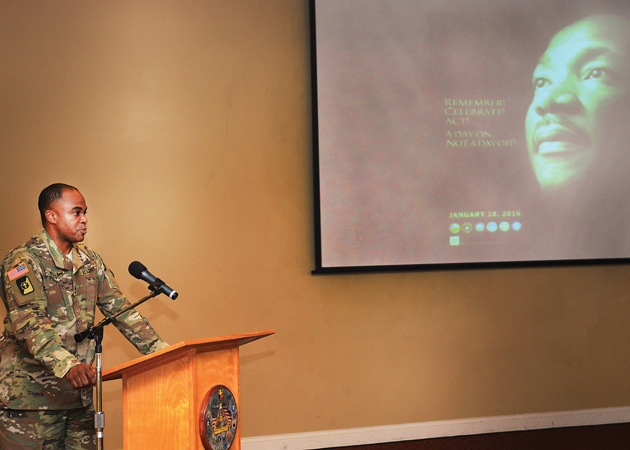 This year’s theme for the commemoration was “Remember! Celebrate! Act! A Day On, Not a Day Off!” The federal holiday, Jan. 18, marks the birthday of the civil rights leader, which is Jan. 15. The holiday is held on the third Monday of January.

The ceremony was sponsored by United States Army Medical Department Activity and the Equal Opportunity/Equal Employment Office here. The MEDDAC commander, Col. Jason Wieman, stated that Dr. King is part of a group of individuals who have truly made a lasting and monumental contribution to the United States of America.

“He stood up in a time of our history that was purely tumultuous,” Wieman said. “It could be said that racism was tearing apart our society and it was chipping away at the foundation of who we were. And he looked that evil of racism square in the eye and shouldered the responsibility of standing up to it and doing something about it to the extent that he lost his life.”

Wieman explained that Soldiers and the military community share an understanding and recognize the contributions of people, such as Dr. King, who have given their lives for a just cause. He stated that Dr. King had values and integrity, and his character was unfailing in terms of respect and loyalty for his fellow man. He believed in volunteerism and tolerance of differences in society.

During the ceremony, several servicemembers and Department of the Army civilians shared their writings and experiences related to the work and teachings of Dr. King and how that has made an impact on their lives.

Sgt. 1st Class Romone Hollins, medical laboratory non-commissioned officer-in-charge with MEDDAC, spoke about growing up in Mobile, Ala., and learning of Dr. King from his father and grandfather.

That summer, Hollins stayed with his grandfather and explained to him about the troubles he was experiencing.

“He truly understood what I was going through because he had experienced such similar things growing up as a young man in Alabama himself,” Hollins said. “He introduced me to the civil rights movement, what it meant and the teachings of Dr. King. He read me his speeches, took the time to explain to me what it all meant. He shared his life experience with me – the good, the bad and the ugly and how Dr. King influenced his life. My grandfather was a hard-working, very peace-loving man. He taught me to turn the other cheek and he always told me you have to rise above the petty things that people do in order to be a better man. Those long summer days filled with the lessons of the past, shaped who I would become.”

Hollins explained that joining the Army helped expose him to different cultures from around the world and this country, and advanced his development as a better man and person.

“Those strong emotional feelings of the South were slowly fading away,” Hollins shared. “I learned to be more accepting of others and their beliefs. Those experiences helped me grow even further.”

As Hollins contemplates life after retiring from the Army he would like to serve where he can share how Dr. King inspired him. He believes in what a first sergeant once told him: “Knowledge not shared is useless.”

“I know that I need a job (after the Army), but I feel a true calling to work within the community and to help develop the youth by passing along to them the teachings of Dr. King and keeping his dream alive – to help reduce the violence that so many of our communities have faced today,” Hollins said. “I picture myself as the man that would be the voice of reason in places like Ferguson and Baltimore as they have rioted.”