Guest speaker for the event was Obba Babatundé — an American actor of stage and screen known for his Emmy-nominated performance in the television movie “Miss Evers’ Boys,” a NAACP Image Award-nominated performance in the TV movie introducing Dorothy Dandridge, and a Tony Award-nominated role for his performance as C.C. White in the original cast of the 1981 Broadway musical “Dreamgirls.” The actor/producer is also an avid horseman and is a highly regarded rider and trainer in the rodeo circuit, including the annual Bill Pickett Rodeo.

The commander of RSS, Lt. Col. James Stephens, spoke at the event and introduced Babatundé. Stevens explained the theme for this year’s observance as ‘Hallowed Ground’ — which recognizes places of significance in the epic battle for civil rights and equality.

“Today we celebrate the heritage of Americans of African lineage and we hold this observance to mark their significance in the fabric of our American life and history,” Stevens said.

Babatundé appreciated servicemembers and leadership in attendance by saying he was honored to be there.

“I have come today to be able to stand and commune with those who would — having never met me — be willing to set forth to lay down your life and limb for my freedom,” he said.

Babatundé expressed the importance of the individual and of being part of a community.

“You are special. You’re powerful. You’re dynamic in what you do,” Babatundé said. “Look around you at one another. We’re a family. We’re a family that’s part of the human family — are we not? And without that, nothing happens. We have to be mindful of not segregating ourselves from the human family. Because when we do that, we create a divide and with that divide we can’t do anything.”

Another message Babatundé imparted was recognizing the connection of current African American generations to generations during slavery. The significance and value of those generations should not be forgotten.

“I want these young men and women [to] identify that they come from something … they are those same people in this generation as those people were in that generation,” Babatunde said in an interview prior to the ceremony.

Babatundé also spoke about identifying as part of a world population. He said we should “see ourselves as citizens of the world, proud Americans going forth to represent the best of who we are so the rest of the world can identify that this is the place that becomes a standard bearer.”

He concluded by reiterating the impact that Soldiers have on the country. 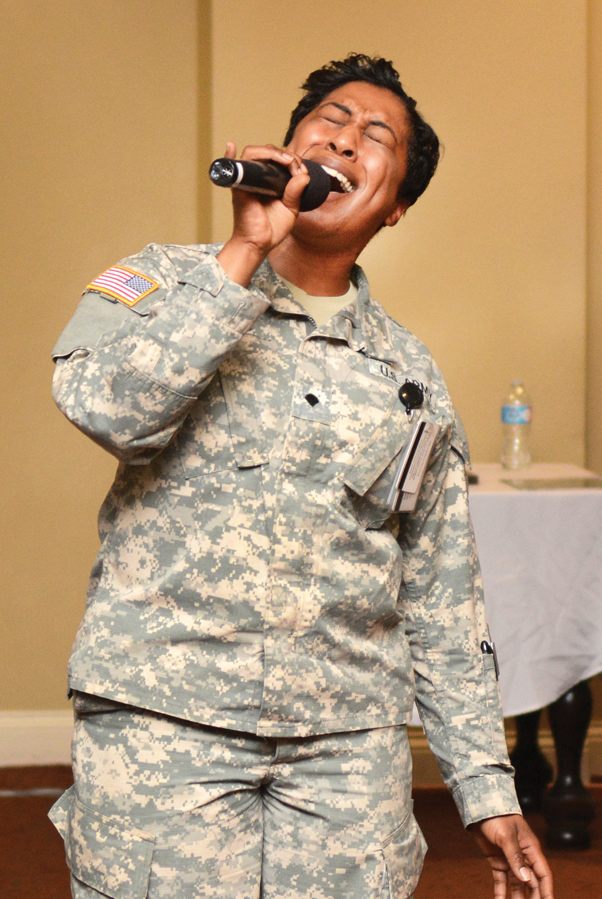