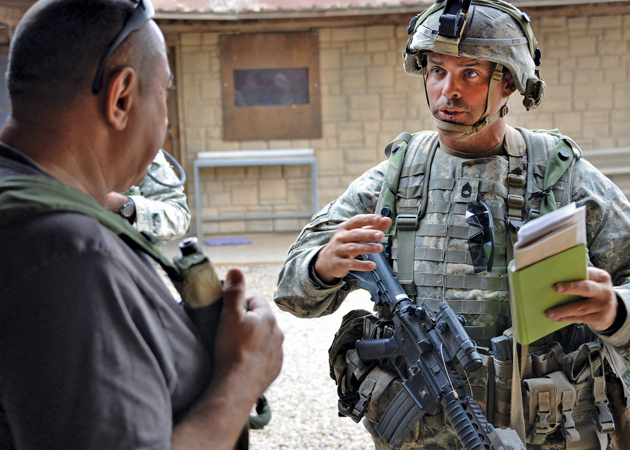 FORT IRWIN, Calif. – Surrounded by sand and rocks protruding out of the ground like thorns, two civil affairs Soldiers prepare for a key leader engagement (KLE) mission. As the Soldiers approach an abandoned building, a four-man security squad emerges out of a dark corner to greet them.

As the group moves out, an observe controller walking five meters back monitors how the Soldiers maneuver through the village, watching how Soldiers interact with role players during the aftermath of the previous day’s scenario.

In the Mojave Desert, civil affairs teams utilized skills and doctrine that hasn’t been used in the last decade as they adapted to training in conventional warfare exercises.

“Civil Affairs is a viable asset in any aspect of fighting, because what we do here is important and we let the civilian population know that we’re not here to take over, because all they might see are big guys with big guns,” said Sgt. Jan-Michael Mohan, a civil affairs noncommissioned officer with C Co., 411th Civil Affairs Battalion. “When we go speak to them, they don’t have that fear anymore.”

The civil affairs teams embedded with 3rd Stryker Calvary Regiment elements – testing their civil affairs skills on role players, who were caught in between the “fighting” of an opposing force and the 3rd SCR.

As the scenario evolved, Soldiers from 3rd SCR did not gain favor with the local population, as civil affairs teams learned during their KLE’s with governing officials. Monitoring the training were observe controllers, who have gone on multiple deployments focusing on the implementation of civil affairs techniques and Soldiers’ attitudes.

“We’re looking to see how dedicated they are to a mission and how knowledgeable they are with the doctrine,” said Staff Sgt. Matthew Susko, a observe controller with the 443rd Civil Affairs Battalion. “This mission is different from what civil affairs has traditionally done, where it’s a force-on-force decisive action engagement [and] civil affairs over the past 10 years has been COIN-centric. The change in mission and adapting doctrine are a bit of a challenge, but most teams are stepping up.”

Susko said the teams were doing a good job integrating civil affairs across their warfighting functions, but there have been challenges along the way.

“They’re supporting a heavy number of conventional troops with armor battalions and … Stryker battalions and are engaging an enemy that has equivalent equipment, so they’re not fighting a counter insurgency war,” Susko said. “The enemy have their own tanks and helicopters, so finding the civil affairs niche in this as opposed to guerrilla warfare takes a bit of adjusting to.”

As the battle rhythm became faster for the 411th, the unit found itself constantly on the move going from mission to mission, while relocating their tactical operation center on a daily basis. Having Reserve Soldiers train alongside their active duty counterparts within the Army affords both components to build camaraderie, but also challenges Reservists to show how citizen-Soldiers can marry both their civilian and military occupations. The unit’s command group challenged the teams to show active duty Soldiers they we’re not to be taken lightly and prepared to prove their worth.

“They didn’t know we were Reservists,” Mohan said. “Some of them thought that we had to go through a selection process, but we explained that we have to be critical thinkers, intellectuals and diplomats all at the same time. If these guys have any idea of what civil affairs is, now it’s the idea that we’re enablers and we’re here to help them out by us painting a broader picture.”

Susko said having experienced Soldiers and officers to lead is important, because conventional war exercises challenge civil affairs troops to focus on their doctrine, warrior tasks and drills, medevac operations, and combat life savers skills – which are meant to keep them on their toes.

“We’re using doctrine and practicing scenarios that we haven’t been able to practice in the last several decades, because we’ve been so focused on counter insurgency warfare,” Susko said. “Relearning how to support a unit in a conventional fight is a skill set that’s fallen by the wayside after the Middle East, and we have to get it back based on current geopolitical situations.”