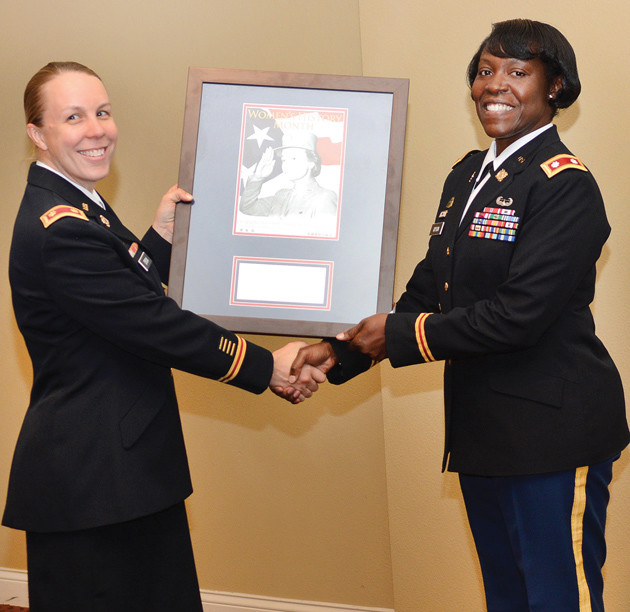 The celebration was hosted by the Equal Opportunity/Equal Employment Opportunity office and Operations Group. The theme for this year’s national observance, which is held in March, is “Working to Form a More Perfect Union: Honoring Women in Public Service and Government.”

The theme honors women who have shaped America’s history and its future through their public service and government leadership.

Ceremony narrator, Sgt. 1st Class Audrey Davis, commented on women who were chosen as honorees for this year’s national observance.

Sixteen honorees were selected by the National Women’s History Project and include: Sister Mary Madonna Ashton, who served as president and CEO of St. Mary’s Hospital in Minneapolis, as state commissioner of health, and founded St. Mary’s Health Clinics; Daisy Bates, who was a journalist and civil rights activist who famously facilitated the 1957 integration of public schools in Little Rock, Ark.; Sonia Pressman Fuentes – a lawyer, author, speaker and pioneering feminist leader who fought for women’s equality in the work force and helped initiate the second wave of the women’s rights movement; Ella Grasso, who was the first woman ever elected governor, serving as governor of Connecticut from 1974 through 1980, and had a political career spanning more than 45 years; Oveta Culp Hobby, who was a pioneer military leader helping define women’s initial role in the Army during World War II, served as the first commanding officer of the Women’s Army Corps and was the first secretary of the Department of Health, Education and Welfare.

“Each of the women … succeeded against great odds,” Davis said. “The diversity of their experiences demonstrates both the challenges and the opportunities women in public service have faced. Their ability to use the art of collaboration to create inclusive solutions and non-partisan policies as well as their skill in determination served to inspire future generations.

“The tenacity of each honoree underlines the fact that women from all cultural backgrounds in all levels of public service and government are essential in the continuing work of forming a more perfect union.”

Gipson stated the observance provides an opportunity to reflect on the “outstanding women in our nation’s history, our armed forces and our individual lives.”

“Throughout our nation we observe Women’s History Month as we seek to draw attention and celebrate the contributions of women to this nation and its Army – contributions which have moved our nation forward on the path towards equal, civil and political rights for all Americans despite gender, race or religion,” Gipson said.

The battalion commander reflected on how 2015 was a breakthrough year for the Army in terms of gender equality. Women Soldiers graduated from the Army’s Ranger School, Maj. Gen. Nadja West became the first African American female appointed as Army Surgeon General, and all military occupational specialties were opened to women.

“For the first time in U.S. military history, as long as women qualify and meet standards, women are able to contribute to the [Department of Defense] mission without barriers,” Gipson said.

Gipson also stated the Army has long been a leader in understanding the power and potential created by embracing diversity in the ranks.

“To that end, women of the highest caliber have served in our Army for generations and have proven that sacrifice and selfless service are genderless,” Gipson said. “The Army is proud of today’s women Soldiers who serve with distinction and our role models exemplifying the Army’s highest values. Women play vital roles in accomplishing the Army’s mission. Women are an asset in the military and integration of women in all career fields will strengthen the Army’s readiness.”