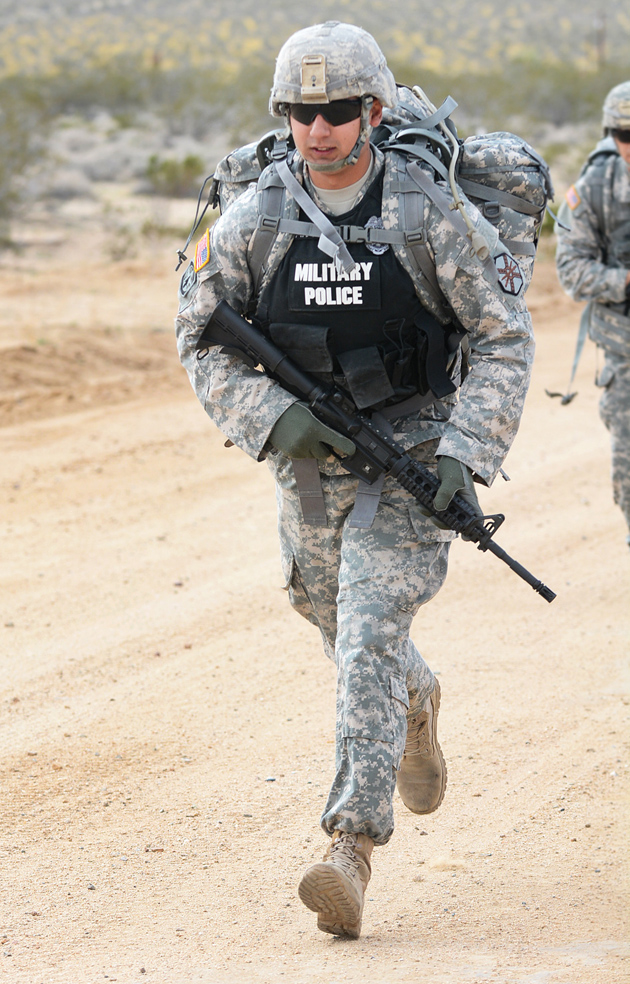 After a post-wide competition here recently among seven service members, a junior Soldier and a sergeant were selected as the National Training Center Soldier and Non-commissioned Officer of the Quarter for the third quarter in fiscal year 2016.

Pfc. Alan Ibarra was named Soldier of the Quarter for the Third Quarter. Ibarra serves as a petroleum supply specialist with 2nd Transportation Company, 1916th Support Battalion under the 916th Support Brigade

Sgt. Eric Cano of Fort Irwin United States Army Garrison was named NCO of the Quarter of the Third Quarter. Cano is a military police officer with Headquarters and Headquarters Company, USAG.

Ibarra said he felt satisfaction, and his wife and family in Prescott Valley, Ariz., are proud of him. He enlisted in 2014 and Fort Irwin has been his only duty station. He competed and won Soldier of the month boards at his battalion and brigade, before participating in the post-level challenge. The toughest part for the competitive athlete (he starts as the center midfielder on the Fort Irwin post soccer team and is on the All Army Soccer squad) was preparing for the knowledge portion. Studying became intense, but the work paid off.

“It’s a good experience,” Ibarra said about competing. “You get out what you put in. If you slack, obviously you’re not going to do as good. If you really focus on it, you’re going to do well.”

“That is the biggest key in doing anything in the military,” Blackston said. “You prepare for an opportunity and when an opportunity comes, you’re ready to accept it.”

Cano stated the most challenging part was preparing for the board while maintaining a busy duty schedule as an MP in a department that is responsible for this post’s safety and security. He feels a great sense of accomplishment and recognizes the win can help advance his career.

Cano’s message to others about competing: “Put 110 percent in your performance and compete for yourself – the rest will come with it.”

Ibarra and Cano now have the opportunity to compete for NTC Soldier and NCO of the Year this summer.

End of an Era, The High Desert Warrior Goes Digital