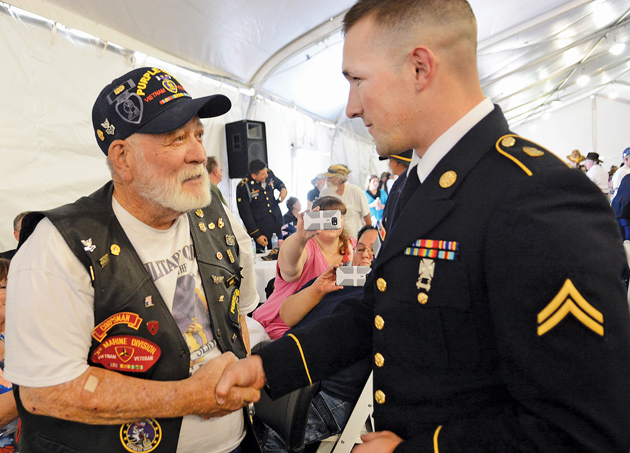 The National Training Center and Fort Irwin honored Veterans of the Vietnam War era during an event here, March 19.

On a clear, warm day, just before the start of spring, the commanding general of this Army combat training center – Maj. Gen. Joseph Martin – proclaimed, “Welcome Home!” to the Veterans during a ceremony celebrating their military service.

Approximately 500 Veterans and their guests sat inside a cavernous tent with Soldiers and leadership during the late morning ceremony. They had received a hero’s welcome from the start of the day, which began with a motorcycle escort to “Painted Rocks,” just outside the installation gate. They took a group photo there and then participated in a parade in front of the NTC headquarters, where Martin, NTC Command Sgt. Maj. Edison Rebuck, and their families waved and greeted the Veterans riding atop military trucks, motorcycles and classic cars. The route was also lined with hundreds of Soldiers and family members, who cheered the procession.

The Veterans continued to receive applause and recognition as they entered the tent for a ceremony and lunch.

Martin expressed that Soldiers and the community was honored and humbled to host the Veterans “from three generations ago for their service to our nation.”

“Some of you made a long journey to come here … but all of you have come here from a long life’s journey in a time and circumstance of faith that brought you in the prime of your life to spend a tour of duty, or more, in Vietnam, to serve the United States in Germany, Korea or elsewhere around the world – to meet our national security needs,” Martin said.

The guest speaker, Joseph Galloway, was introduced by Col. Scott Taylor, commander of Fort Irwin United States Army Garrison. Galloway is a retired journalist and co-author of “We Were Soldiers Once … and Young.”

Taylor explained Galloway served four tours as a war correspondent in Vietnam. He was recognized in 1998 with a Bronze Medal with “V” device for rescuing wounded Soldiers under fire in Ia Drang Valley with the 7th Cavalry in November 1965.

“He is the only civilian to be awarded a medal for valor by the U.S. Army for actions in combat,” Taylor said.

Galloway thanked the former servicemembers in the audience and stated, “Welcome home brothers and sister Veterans.”

Galloway spoke solemnly of the Soldiers he witnessed die and receive wounds at Ia Drang. He said 80 were killed and 130 wounded.

“And what I knew when I left that battlefield was – I owed such a debt to those men, who laid their lives down so that I might live,” Galloway said. “I have spent 50 years now since that battle trying to repay that debt by telling the stories of our Vietnam Veterans. I stood beside them and fought beside them in that battle, and I stand beside you today to fight the other battles trying to get the medical care that you were promised and sometimes have a great deal of difficulty obtaining.

Doug Whetstone, an Air Force Veteran who served in Vietnam from 1969 to 1970, said he was attending the Fort Irwin event for the first time and loved it.

“I have never seen anything like it,” said Whetstone, who came from St. George, Utah.

A Veteran, who traveled from Katy, Texas, said the event was bigger than he expected. John Alford, who enlisted in the Army while living in Houston and served in Vietnam, 1960-70, with the 11th Armored Cavalry Regiment also thanked the community here for the celebration.

“This is amazing … this many Vietnam Vets together in one place. You never see that,” Alford said.