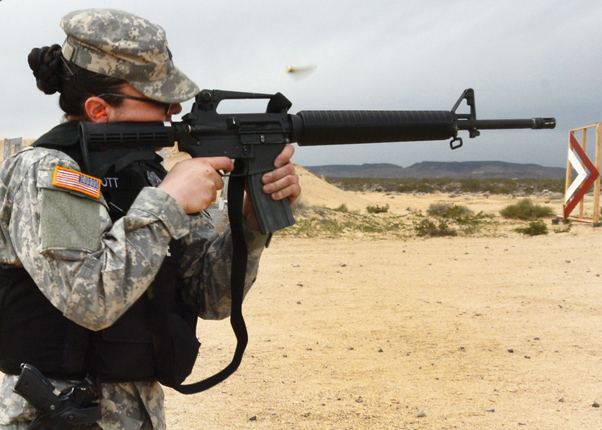 The Directorate of Emergency Services selected leadership for a special reaction team and has begun a partnership with an Army National Guard military police unit to support the security and safety mission of Fort Irwin.

The DES sergeant major, Sgt. Maj. Randy Cheadle, stated that Capt. Dennis Johnson has been designated as the officer-in-charge and Staff Sgt. Gordon Williams is the non-commissioned-officer-in-charge of the Fort Irwin SRT. The 11-officer team is scheduled to be fully staffed and certified by May 2017.

Approximately 10 military police Soldiers and Department of the Army civilian officers participated in tryouts this past winter to be on the team.

Two Soldiers are currently in SRT training phase one at Fort Leonard Wood, Mo., and one DA officer has recently completed phase one, said Cheadle. Two additional Soldiers are scheduled next to attend the two-week course.

As the team grows, it will conduct additional SRT training here, said Cheadle. Team members participating in training will have to be substituted with other officers to continue the safety and security mission. Those substitute officers will come from the 330th MP Company of the California Army National Guard when they conduct their drill weekends. Drill weekends are actually four days.

The 330th MP Company Soldiers will first conduct annual training (two weeks) in May to familiarize themselves with Fort Irwin policies and procedures, said Cheadle. A memorandum of understanding outlines specific requirements by the Army’s Office of the Provost Marshal General that the 330th must comply with to perform law enforcement duties on this post. In July, the unit will begin conducting their monthly drill weekends here.

“It’s a truly great partnership [and] relationship with the National Guard,” Cheadle said. “We could not certify our SRT if we didn’t have this relationship, because we don’t have the personnel. It takes a lot to pull 12 people off the road at any given time, because we’re limited.”

Cheadle said SRT members (12 to be trained) begin preparation in July with the basic skills of hand and arm signals, call signs, muster procedures, and developing standard operating procedures. Training will also involve weapons shooting at ranges, to include familiarization with the M110 sniper rifle (phase two at Leonard Wood is entirely sniper qualification). The SRT OIC and NCOIC will begin developing relationships with post directorates, agencies and facilities to become familiar with their facilities, SOP’s and infrastructure.

The National Guard Soldiers also bring training and certification capabilities from their civilian law enforcement backgrounds at various, local jurisdictions. They will assist in training Fort Irwin military police to become post 832 qualified, which is the California certification to be a police officer, stated Cheadle. Some of them are also SWAT members and can assist in the SRT training.