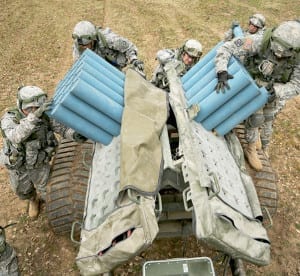 Soldiers from Alpha Troop, Regimental Engineer Squadron, 2nd Cavalry Regiment load dummy rounds onto an M139 Volcano mine system during Saber Junction 15, an exercise held in April 2015 at the U.S. Army’s Joint Multinational Readiness Center in Hohenfels, Germany. Systems like the Volcano require periodic attention to ensure that they do not become obsolete.

The Army has significantly increased its emphasis on training for combined arms maneuver and wide area security operations in contemporary and future operational environments.

This increased emphasis has led to a dramatic resurgence in the demand for and usage of many legacy area-denial systems that had been infrequently employed during the last decade-plus of counterinsurgency operations, which did not require extensive or large-scale operations by mounted and dismounted forces against peer or near-peer level mounted and dismounted forces.

Large-scale operations frequently require a means of shaping large blocks of terrain–that is, enabling or restricting the movement of enemy forces through the employment of explosive ground-based munitions and other means. In the past, mines performed this function. Future operations will require more advanced munitions that are policy-compliant and much more capable than the “dumb” conventional mines they will replace.

The increase in terrain-shaping system usage has resulted in a variety of sustainment challenges. Compounding these challenges are the age and landmine factors inherent in some legacy Family of Scatterable Mines systems.

Collaborative efforts by the Project Manager, Close Combat Systems within the Program Executive Office for Ammunition; U.S. Army Armament Research, Development and Engineering Center; and U.S. Army TACOM Life Cycle Management Command have provided extensive and successful support to the user community to overcome these challenges. The effects of this support are visible at the proponency level, at the level of units in the field, and at combat training centers.

Some of the sustainment challenges with legacy area-denial systems include system age; battery life and obsolescence; changes in ground and air prime mover platforms; the demand for and availability of repair parts; priority of sustainment funding; unit familiarity with maintaining and operating the systems; and evolving policy guidance and treaty requirements.

Military forces use FASCAM systems to rapidly emplace terrain- shaping obstacles onto specific geographic locations with the intent of altering or ceasing the enemy’s movement in a manner desired by friendly forces, to gain tactical advantage. Multiple systems, both air and ground, exist to accomplish this goal.

A Volcano system after refurbishment. While ARDEC took the lead on system and subsystem technical data packages to find replacement parts for obsolete components, TACOM developed a new refurbishment process to get aging systems up to speed. But existing policies surrounding mine systems present other challenges.

A battery of challenges
One of the primary challenges with older systems that contain electronic components, such as the Volcano, is the constant advance of technology. Keeping pace with the rapid evolution of electronic technologies is a tremendous challenge, and systems like the Volcano require periodic attention to ensure they do not become obsolete.

Separately, many systems share a challenge with battery life-span and performance. Many of the Army’s advanced munition capabilities are particularly dependent upon battery lifespan and reliability, as these munitions require dependable, constant and immediately available power, and they cannot be attached to external power. Many batteries in the legacy FASCAM munitions systems such as the Volcano are embedded within the individual munitions and are reaching or exceeding their design life. Since the munitions were designed with safety, reliability, performance and avoidance of tampering as key priorities, the batteries were placed in the munition. This leads to sustainment issues when unused munitions approach the end of their predicted shelf life.

The batteries were designed to provide the required power for full operation of the munitions for many decades after they are fielded. However, the chemicals in the batteries may break down over time, which may reduce the amount of available power or the time it takes to provide the power to the system when needed. This failure may be accelerated as harsh environmental conditions are encountered for prolonged periods of storage. While battery performance and shelf life have greatly improved, all batteries have a finite lifespan. Ongoing studies on current FASCAM system batteries will inform decisions on the appropriate sustainment strategies needed to continue to provide the FASCAM capability.

The ongoing battery studies employ known aging strategies and techniques to predict shelf life. These include exposing the batteries and electronic components to extreme temperatures and elevated humidity levels for as long as months at a time. The high temperatures and humidity levels are typically higher than the storage and operating environments that would be encountered when deployed, but lower than the known conditions that cause failures or unwanted changes. For example, if liquid water is a key component in a tested sample, researchers may not want to expose it to 212 degrees Fahrenheit at normal atmospheric pressure since boiling may have a negative effect on the sample.

However, if the sample is typically used in an environment where temperatures reach 160 degrees Fahrenheit, then exposing the sample in the study to 200 degrees may provide the needed data. In the case of FASCAM, operating temperatures may reach higher than 100 degrees in the desert at the hottest point during the day even when shaded from direct sunlight. The batteries and electronics are designed to survive desert conditions; however, there is a negative impact on battery shelf life after repeated and prolonged exposure to such conditions.

Another technique used to predict shelf life is to cycle the temperature and humidity through high and low extremes, to simulate the changing conditions during a 24-hour period. Constant changes in temperature and humidity could weaken or degrade seals, cause surfaces to deform or warp and cause joints to separate, which may break electrical circuits and prevent the flow of electricity when needed.

As samples are removed from the test chambers, they are checked to determine if they are still operable, whether they are working as they were originally designed and how much degradation has been encountered. Mathematical analysis provides an estimate of predicted lifespan. The shelf life study is scheduled to be completed by September 2016. 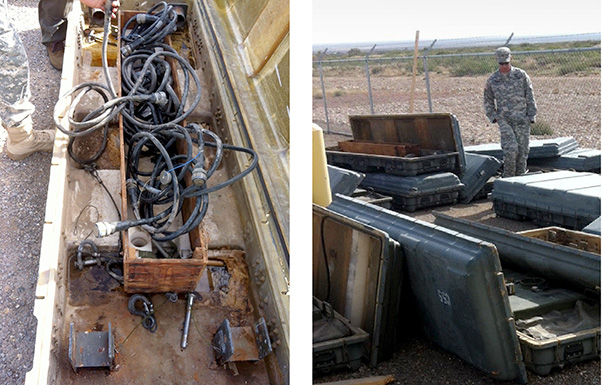 The Volcano system, shown here before refurbishment, is a mass scatterable mine delivery system that delivers mines by helicopter or ground vehicle. The age of such systems presents a variety of sustainment challenges, including battery life, changes in the air and ground vehicles that emplace them, and many others.

Past its use-by-date
While battery shelf life is a concern, it is not the sole failure mode for advanced munitions. Plastics and electronic components are also subject to deterioration over time. Potting material may lose its integrity and no longer provide the physical support required for high G-forces during launch and ground impact. From the electronic side, solder can break down and cause the growth of “tin whiskers” that can create unwanted paths for current to flow. Additionally, circuit boards can delaminate, breaking needed pathways for current flow.

With the Volcano system, ARDEC began its support by reviewing the various system and subsystem technical data packages to identify modern replacements for the obsolete legacy components. TACOM then developed a new repair-and-replacement process at its depot facility to refurbish the aging Volcano systems. TACOM proved out this program on a limited quantity of Volcano systems in fiscal year 2015, and is now planning to continue the sustainment work when funding is made available.

PM CCS and ARDEC initiated a long-term study of currently fielded FASCAM systems to look for evidence of deterioration as the result of the different failure modes mentioned previously. The goals of this study include determining remaining shelf life of the systems and applying lessons learned to the development of new FASCAM systems.

Policy guidance also introduces legacy system sustainment challenges. There are both age and treaty compliance challenges inherent in most legacy FASCAM systems. U.S. landmine policy and two 2014 White House announcements on antipersonnel landmines ban the use of persistent landmines, which, if not removed or destroyed, can remain deadly indefinitely, and restrict the use of APL outside of the Korean Peninsula.

In September 2014, the White House published “Fact Sheet: Changes to U.S. Anti-Personnel Landmine Policy.” This document stated that the U.S. “will not use APL outside the Korean Peninsula; not assist, encourage, or induce anyone outside the Korean Peninsula to engage in activity prohibited by the Ottawa Convention; and undertake to destroy APL stockpiles not required for the defense of the Republic of Korea.”

The use of persistent landmines ended in 2010. Since that time, U.S. forces had only been allowed to employ self-destructing or self-deactivating APLs and antivehicle landmines. This left U.S. forces with two legacy area-denial system options for employment outside the Korean Peninsula: the M87A1 Volcano and the Remote Anti-Armor Mine. The current, available FASCAM systems lack “human-in-the-loop” control capability and scalable lethal and nonlethal effects. Additionally, current U.S. FASCAM systems are approaching or are beyond their original design life.

Conclusion
To address this change, and to meet the war fighting requirements in unified land operations anywhere in the world, the joint force is developing rapidly emplaceable and treaty-compliant scatterable munition systems. PM CCS is leading an effort, directed by the Office of the Secretary of Defense, to establish a program of record to develop an Ottawa Convention-compliant air-delivered, operator-controlled munition system that will provide both antivehicle and antipersonnel munitions and will replace the current GATOR system, with an initial operating capability goal by fiscal year 2025.

Despite the various challenges faced with the resurgence and continued needs for the legacy weapon systems, PM CCS is aligned with the Army’s priority to use existing capabilities in new ways to provide increased lethality, survivability and overmatch to both the mounted and dismounted joint force in the close fight. The FASCAM replacement with human-in-the-loop initiated effect will ultimately provide the commander with the capability to prevent, shape and win in order to accomplish their mission and meet the needs of the 21st century operational environment.

Second Stimulus Check? What to expect