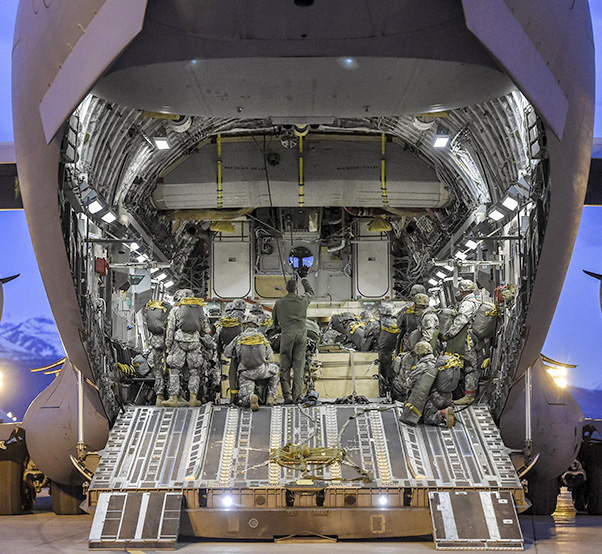 Paratroopers board and position their gear inside an Air Force C-17 Globemaster III aircraft before participating in a night jump at Joint Base Elmendorf-Richardson, Alaska, March 31, 2016.

Five brigades in the future might consist of only officers and NCOs with no junior soldiers.

Chief of Staff of the Army Gen. Mark A. Milley calls these “train, advise and assist” brigades and he explained how they will work during a June 23 forum hosted by the Center for Strategic and International Studies.

“This idea is not hollow at all,” Milley said in response to a question by Dr. Kathleen Hicks, moderator of the forum and director of the CSIS International Security Program. “These guys would be operationally used all the time.”

Each brigade would deploy to a different combatant command area to help train allies and partners, he said. Their mission would be similar to what units have been doing in Iraq and Afghanistan.

The structure of the new units would be similar to that of a current infantry brigade’s chain of command, Milley said, but without the privates and specialists. In the case of a national emergency, he said newly-trained Soldiers could be added to stand up full units quickly.

“I look at it as if you get a two-for,” Milley said. “You get a day-to-day engagement that the combatant commanders want in order to train, advise and assist. And then in time of national emergency, you have at least four or five brigades with standing chains of command that can marry soldiers up like the old COHORT units.” 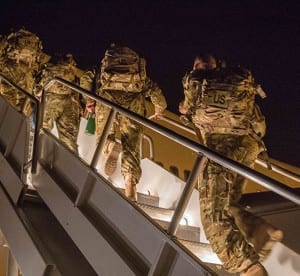 Soldiers from the 36th Infantry Division, Texas Army National Guard, climb the gangway as they deploy to southern Afghanistan June 11, out of Fort Hood, Texas. They will be joining Task Force Arrowhead as part of the “train, advise and assist” team whose mission is to work with Afghan National Defense and Security Forces. In the future, TAA Brigades may only be composed of officers and NCOs, said the Army’s chief of staff.

COHORT battalions existed in the 1980s and Milley served with one. “That’s part of where I got the idea,” he said.

The whole idea was cohesion, he said. “So the idea was that if the unit chain of command trains together for three or four months, they’re very cohesive. And then all of the Soldiers go through basic training together; they all go through Advanced Individual Training together at Fort Benning.

“Then when you marry them to the chains of command, the amount of time it will take to build a cohesive unit will be shortened. And it was. And those were incredible battalions.”

The first of the new brigades should be operational by 2018 or 2019, Milley said. They will be stood up one at a time, he said.

“We’ll pilot it, we’ll make sure we get the design right,” he said. “We’ll take it slow at first and not rush to failure.”

After the first advisory brigade is tested in theater, Milley said the design could be “tweaked.” Within five years, there should be five of the brigades — one for each combatant commander, he explained.

It would be second commands for the officers assigned. A company commander or battalion commander in one of these advisory brigades would already have commanded a unit with troops, Milley said.

Normally, officers and NCOs would serve together in the “train, advise and assist” units for about three years, the chief said. They would become proficient advising host-nation forces during that time.

“There’s a little flavor of Special Forces in there. There’s a flavor of the Foreign Area Officer program. These people in these units would get cultural training and language training and that sort of thing,” Milley said. 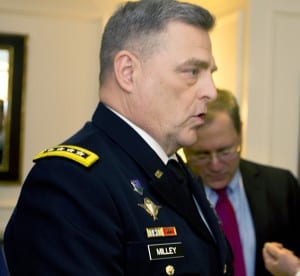 Chief of Staff of the Army Gen. Mark A. Milley is shown here at a Council on Foreign Relations event in New York, May 3, 2016. He spoke at a military forum hosted by the Center for Strategic and International Studies on June 23, 2016.

“But you get a secondary benefit,” he added. In time of pending crisis or war, new troops could be added to stand up full infantry brigade combat teams.

It’s one of the only ways that brigades could be stood up quickly today, given the complexities of modern combat operations, Milley said.
“It takes a long time to train a platoon sergeant, to train a battalion commander, to build a unit,” he said.

Milley said he came up with the idea of the new brigade structure in order to manage risk associated with a shrinking Army. By 2018, the total Army — National Guard, Reserve and Active — is projected to drop below a million to 980,000.

That’s still a large force, he said, but it might not be large enough to fight two major contingency operations at once. For instance, taking on potential adversaries such as Russia and North Korea at the same time could pose a risk. Additional forces might be needed quickly.

“This isn’t your instant pancake when we add water, mix and throw it on the grill and you got a pancake. It doesn’t work like that,” Milley said about regenerating units.

However, the “train, advise and assist” brigades could be filled out within months.

Americans have a long history of responding to crisis and rallying under the flag, Milley said. Especially in the case of a direct attack against America, he predicts recruits would flock to defend the nation.

“I assume people would volunteer and then we could take Soldiers and put them through basic training and AIT,” he said.

“And then marry those soldiers up to those existing chains of command” in the advisory brigades, “and then run them through collective training to get them ready as a unit.”

“That would considerably shorten the length of time it would take to create units — brigades and battalions.” 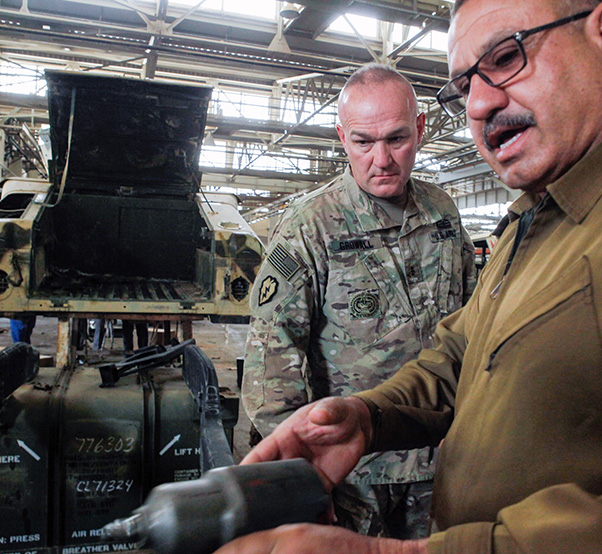 Chief Warrant Officer 3 Randy Growall, left, attached to the 300th Sustainment Brigade, observes a maintenance procedure during his visit to an Iraqi army small-wheel depot June 9, 2016, near Camp Taji, Iraq. Soldiers on such missions could be assigned to train-advise-and-assist brigades in the future. These brigades would have no junior Soldiers unless filled with trainees during a pending crisis, said Chief of Staff of the Army Gen. Mark Milley.