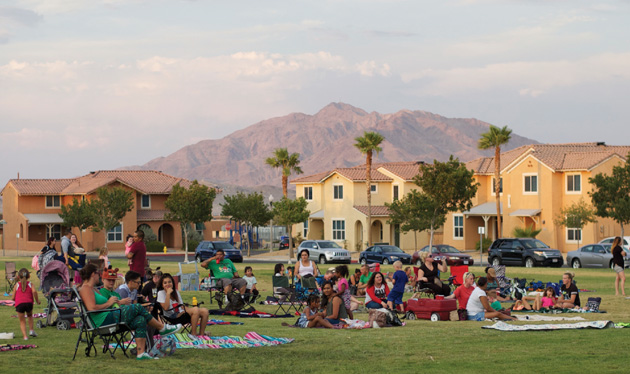 Over 150 eager people enjoyed complimentary smoothies and organic popcorn provided by the Cracker Jack Flats Mayors and several community volunteers. Parents and children anxiously awaited the desert sun’s departure from the horizon while enjoying themselves with a friendly game of bean bag toss.

People talked and laughed as they sat in folding chairs enjoying fellowship and taking time to reconnect with one another, despite the 91 degree heat.

Major General Joseph M. Martin has challenged members of the Fort Irwin Community to pause and take the time to appreciate one another; families, friends, and neighbors alike.  The Movie in the Park event offered just that, an opportunity to relax and reconnect after this past month of training in the desert.

As the purple sky turned to black, the movie began and families crowded onto one blanket to enjoy the featured film together, reforging family bonds that can be sometimes strained due to the demanding tempo of life at the National Training Center.

As the movie drew to a close, scenes of sleeping children in their parent’s arms, piggy-back rides, and hand holding were commonplace as families headed home to retire for the evening. The next Movie in the Park is scheduled for August 15th in the Cactus Cove neighborhood.