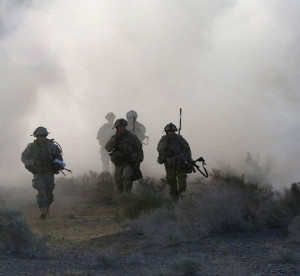 Soldiers assigned to 1st Battalion (attached to 1-2 Stryker Brigade Combat Team for training), 28th Infantry Regiment, 3rd Infantry Division, move under the cover of smoke during Decisive Action Rotation 16-06 at the National Training Center in Fort Irwin, Calif., May 16, 2016. The training focused on the 1-2 SBCT combating a near-peer enemy and smaller militant groups in a foreign country.

When Lt. Gen. Robert T. Dail retired seven years ago, he was one of the most senior military logisticians in the Department of Defense.

In his last assignment, he served as the director of the Defense Logistics Agency, where his team was providing 95 percent of the materiel used in the wars in Iraq and Afghanistan. An interview was conducted to get his perspective on today’s Army readiness and the evolving relationships among the Army, its sister services, and industry.

At the operational level and, to a greater extent, the strategic level, where commands are filled with a combination of military members, career civilians, and contractors, logistics leaders have to be flexible and resilient–ready to change. They have to be ready to deploy their experts to integrate with tactical and regional commands so that responsive support is provided to the troops.

What changes to improve readiness should be at the top of the Army’s list?
First, the requirement to deliver precise logistics output and support will continue to grow in importance. In the future, however, the Army may not deploy the large numbers of Soldiers that it did in the last decade, when well over 100,000 soldiers were fighting wars overseas. It may deploy smaller units to work as part of joint task forces that will be dispersed over greater distances. These forces will still demand the same types of support. So, precision will become more paramount.

Second, and key to precision, is understanding war fighter demand. This task is going to be extremely challenging in a dynamic environment. It is going to require leaders not only to understand their own organizations but also to be more broadly educated about the capabilities of external experts and teams that will rapidly integrate into their organizations during contingencies.

Finally, future logistics leaders will have to employ more visual analysis tools across the enterprise in order to determine the capabilities that will ensure our troops get what they need efficiently.

Where can industry best be leveraged to improve readiness?
The 20th century structure will not deliver the readiness the Army requires for the right efficiency in the 21st century. While the Army had large logistics organizations in the past, the future Army’s internal capabilities will be smaller and more distributed. The Army has to continue to aggressively adapt to access the competitive advantage industry offers so that it can get the best outcomes for our troops in the field.

When I was a major in the 24th Infantry Division in Operations Desert Shield and Desert Storm, I first experienced industry capabilities inside the division’s rear area. The Army Materiel Command had hired contractors to rebuild and repair M1 Abrams tank components. Over the next 20 years, industry presence grew enormously in overseas theaters.

In the future, logistics leaders will be challenged by senior Army leaders to integrate industry capabilities more effectively through improved mission command and to plan for industry to execute a wider range of functions in forward areas. The Army has to do this to preserve its fighting force.

What changes will the Army need to make to more fully integrate industry capabilities?
When we first deployed into Iraq in 2003, we operated on a single line of communication from Kuwait. Several years later, we operated on exterior lines, bringing support in through industry partners and vendors from Turkey, Jordan and Kuwait. We also flew supplies in from Germany, and we brought supplies in directly from the United States. The role of industry increased dramatically. As we look to the future, Army mission command will have to be organized to better synchronize the operational capabilities of industry supporting the troops. This will place a huge responsibility on future logistics staffs to understand contract requirements in their theaters in order to best utilize contractor capabilities.

Industry integration will require shared information and systems. It will also require representation from national-level activities that contract for services and materiel in theater, such as the Army Materiel Command, the Defense Logistics Agency, and the U.S. Transportation Command.

Industry will have a key role in assisting Army logisticians in understanding what is possible when providing solutions. Industry will provide Army leaders with current and future business intelligence throughout the planning phase of operations. This business intelligence will include the markets and capacities available in regions for various services and commodities.

The information from industry will complement traditional intelligence such as enemy, terrain, and weather. We can achieve the integration of industry and its information without compromising proprietary information or fairness.

What barriers to sustainment mission command do units face, and what can they do to overcome these barriers?
The most significant barriers to sustainment mission command are related to communication and information sharing. The Army and Department of Defense logistics enterprise are enormously capable. Although each organization desires and attempts to support the troops, natural barriers form between these entities because of funding sources, separate command authorities, specific missions, geography, and organizational culture.

In the end, relationships between logistics commanders and their staffs throughout the logistics enterprise are critical. Leaders have to work hard at these relationships. Trust is the cornerstone.

Strong leadership at every level and node of the network ensures that organizations share information and respond to warfighter demand; this is how units overcome the barriers to responsive logistics.

Subordinates observe their leaders’ examples in demonstrating transparency. And senior leaders empower the whole network of leaders to take appropriate action to successfully support the mission. Synchronizing the myriad capabilities from the logistics enterprise is paramount to rapidly organizing, attaching and detaching units, and expanding the Army mission command structure.