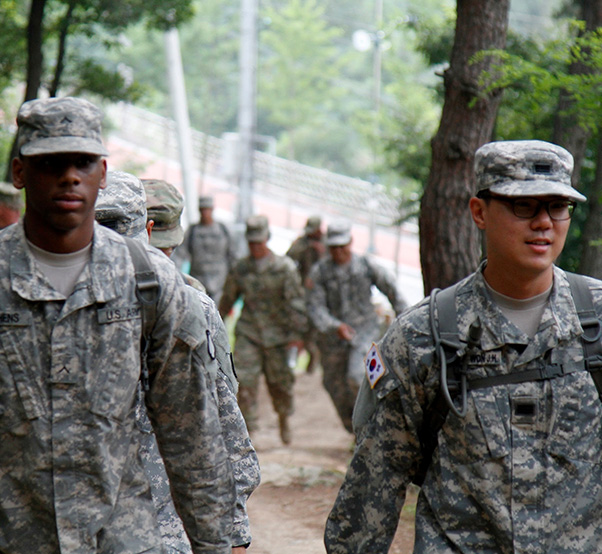 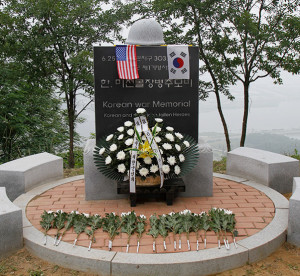 “They just kept us in a ravine in the daytime. Then at night they’d move us across country. On Aug. 17, about the middle of the afternoon they motioned for us to get up again, that they was going to move us out again. That’s when it happened. That’s when I started hearing shots. I looked around and I saw my buddies was falling, getting murdered with their hands tied behind their back.”

These are the words spoken by Cpl. Roy Paul Manring Jr., one of the four survivors of the Hill 303 massacre when he testified in front of a congressional committee about atrocities during the Korean War.

The 6th Ordnance Battalion hosted a Hill 303 Wreath Laying and Memorial Ceremony, June 30, 2016, at the Hill 303 monument near Camp Carroll in Waegwan to honor the sacrifice made by these young men.

Soldiers hiked up the steep hill early in the morning. When they reached the top of the hill the Soldiers together with the Korea Veterans Association and local students laid a wreath and flowers on the memorial.

Hill 303 was a major battle site during the Korean War where the U.S. 1st Cavalry Division successfully defended Waegwan during the battle. Forty-one captured U.S. Army Prisoners of War were killed by North Korean soldiers. 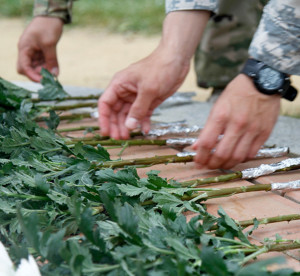 According to the official report, on Aug. 14, 1950, a group of 26 American Soldiers was surprised and captured by North Koreans whom the Americans had reason to believe were reinforcements. The men were stripped of their combat boots and personal belongings and their hands were tied behind their backs. The second day after capture, several other American prisoners joined their group, bringing the total number to 45. On the third day, all of the prisoners were led to a ravine, and without warning, while their hands were tied, were shot in cold blood.

“It is important to keep the memory of the heroes of Hill 303 alive,” Col. Ted Stevens, commander USAG-Daegu said, “remember that 66 years ago, liberty was at stake … remember that two nations stood firm together and fought for liberty and freedom.”

Capt. Sam H. Kim, commander 84th Ordnance Company, was born in the Republic of Korea and spoke to the many Koreans who attended the ceremony saying, “My beloved Korean brothers and sisters. The purpose of today’s event is to search for brighter future by looking through the lens of heart-breaking history. What have we learned from the Korean War? Soldiers from 16 countries around the globe including the U.S. participated in the war to help out a small country they never knew and shed a lot of blood, all because they believed in the peace for humanity and preservation of liberty.”

The 6th Ordnance Battalion has been hosting memorial services on Hill 303 since 2002 in order to honor the memory of those who died.

Second Lt. Katherine Sheaffer, Executive Officer 84th Ordnance Company, says “We hope this event reaches those in the community to never forget the Soldiers who fought and lost their lives in the Korean War.”

Message to the Army community about recent events at the U.S. Capitol

Message to the Army community about recent events at the U.S....