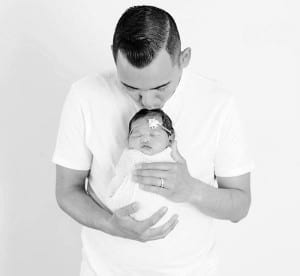 SSgt. Bryan Jovel, an automated logistics specialist who’s currently deployed to the Middle East with the 17th Sustainment Brigade, 1st Theater Support Command, kisses his daughter, Brooklyn, born April 15. It was a challenge for Jovel to take care of his newborn daughter while recovering from jet-lag.

It’s a tale as old as time: soldiers bidding farewell to their families to serve in a faraway land.

To this day, men and women serving in the armed forces face the same reality. Even with technology and the ability to video chat with loved ones, it’s still hard being away from home.

This is especially true for a father who’s away for the birth of his first child, which is what four Nevada National Guard soldiers experienced over the last few months when they were deployed to the Middle East with the 17th Sustainment Brigade, 1st Theater Support Command.

“My girlfriend just called me and told me we are having a baby,” said Spec. Julio Ramirez, a wheeled vehicle mechanic with the 17SB.

Soon after Ramirez made arrangements to go on leave to return to Las Vegas for his daughter’s birth, he learned that the doctor would be inducing labor a few weeks earlier than expected. He quickly returned to Camp Arifjan where he franticly trying to rush through the protocol and paperwork the Army needed to send him home. 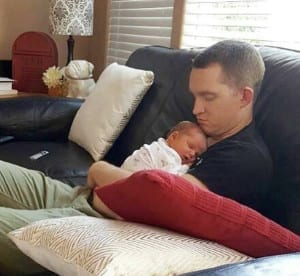 Sgt. Sean Holm, a chaplain assistant who’s currently deployed to the Middle East with the 17th Sustainment Brigade, 1st Theater Support Command, holds his daughter, Adeline, born April 24. Holm was not able to make it back in time to witness his daughter’s birth, but while on leave, he was able to take care of his daughter while his wife recovered.

First impressions
SSgt. Kevin Reed, an information technology specialist with the 17SB, was overseas when his daughter Ave was born on Feb. 17.

“Right when I first got home, I got to see my baby girl,” said Reed. “I can’t really describe the feeling.”

“It’s amazing to have your first child, and what I felt the first time I held my little girl …” said Sgt. Sean Holm, a chaplain assistant with the 17SB, whose daughter Adeline was born April 24. “Every time I held her, it was an amazing experience.”

“It was definitely an experience,” said SSgt. Bryan Jovel, an automated logistical specialist with the 17SB and father to Brooklyn, who was born on April 15. “I felt anxious because the moment was coming which we were preparing for. At first, I was taken a bit aback once the delivery started happening. I felt like passing out, honestly.

“When the baby started coming I was overcome with some weird emotion, a mix of relief, happiness and responsibility. I saw my baby come out and realized at that moment that, no matter what, she’s a part of me, and she is now here.”

“She went into labor early, so I had to scramble to get an early flight,” said Holm. “I ended up getting there a day after she was born.”

Joy through sleepless nights
Holm was not able to make it back in time to witness his daughter’s birth, but while on leave, he was able to take care of his daughter while his wife recovered.

Holm said arriving later was actually better, rather than arriving a few days earlier and having only a few days to help. While on leave, he was able maximize his time and take care of his daughter while his wife recovered. 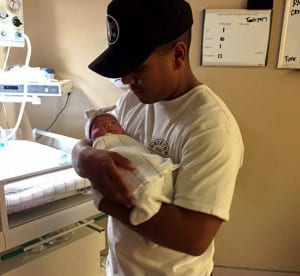 Spec. Julio Ramirez, a wheeled vehicle mechanic who’s currently deployed to the Middle East with the 17th Sustainment Brigade, 1st Theater Support Command, holds his daughter, Isabella, born June 8. Ramirez’s daughter was born earlier than expected. He had to scramble to get home from the Middle East but arrived in time to be present at the birth.

“It felt really nice to be home and take care of both my baby and wife,’ said Joval. “I liked staying home and taking care of my baby.”

“I thought the Army would prepare me for sleep deprivation, but it’s nothing like having a newborn,” said Holm.

“I got a whole lot more sleep here, that’s for sure,” Reed laughed. “My wife and I took 12-hour shifts.”

“It took some adjusting because I was still getting used to the time, and I was sleeping at weird times. I was a bit tired since she needed tending to during the night,” said Jovel.

None had to shoulder this added responsibility alone. The Soldiers were grateful that they had their friends and family to lend a helping hand.

“They wanted to give us some alone time for the first couple days,” said Holm. “None of them realized that I also needed help. There was so much work and so little sleep.”

Staying connected while continuing the mission
The soldiers had to return to the Middle East after their approved leave period came to an end.

“It was hard to leave my wife and newborn baby,” said Holm. “I knew I had to come back here. I don’t get to go home until the mission out here is done. The sooner I get back here, the sooner I get to go back home.”

Reed said he uses any chance he gets to talk to his daughter. 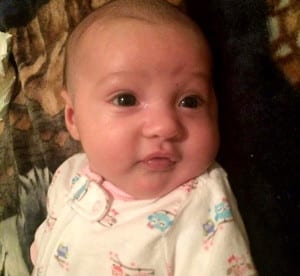 Ave, daughter of SSgt. Kevin Reed, an information technology specialist who’s currently deployed to the Middle East with the 17th Sustainment Brigade, 1st Theater Support Command, was born Feb. 17. Thanks to modern technology, Reed can video chat with his wife and daughter on a daily basis.

“I get to video chat with them all the time,” he said. “I get to watch her grow up. She is growing fast.”

“The internet connection now is much better,” Reed said. “It’s hard being away from them, but with technology, it’s as if you’re right there with them too, and the time will go by so quick while you’re here.”

“I keep in touch with my wife using facebook messenger every day,” said Jovel. “I video chat with them periodically as well.”

“I’ll be there for her first birthday, which will be awesome,” Reed said.

“You have to take it one day at a time,” said Ramirez.

Ramirez was able to make it back in time for the birth of his daughter, Isabella. She was born on Friday, June 8, 2016.